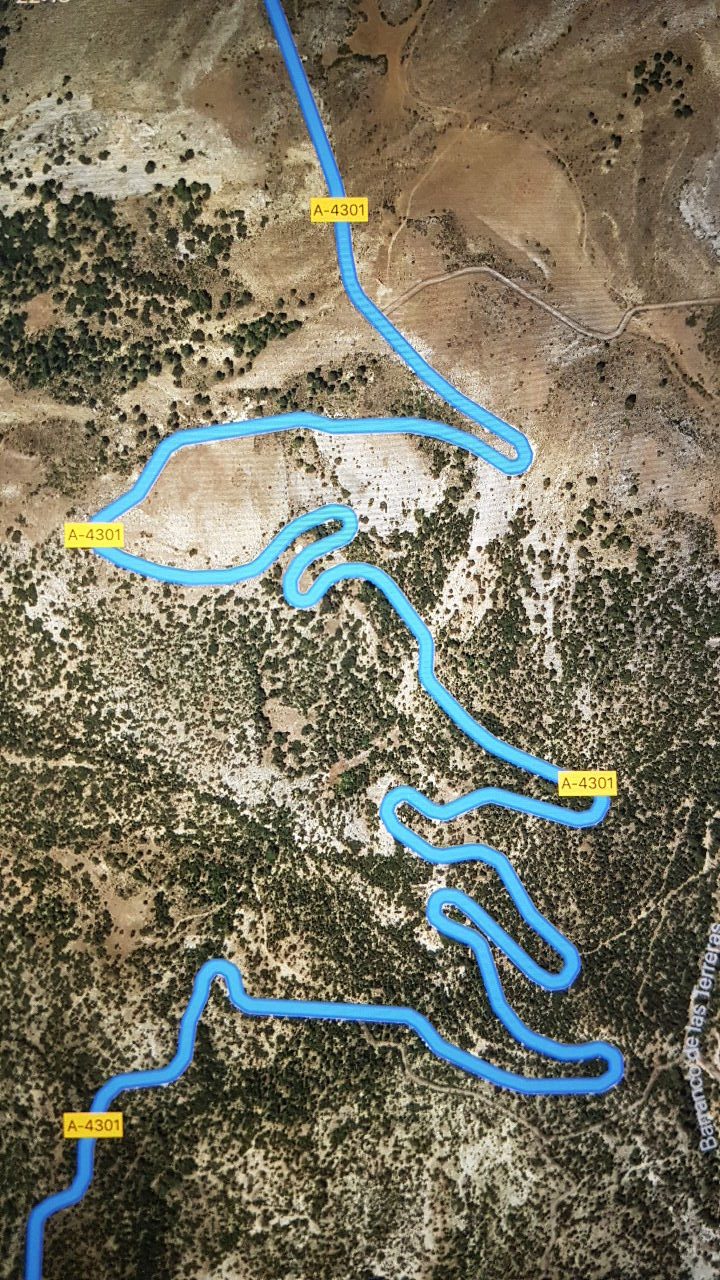 By the time I left my hotel in Colmenar – the superb Casona Los Moriscos, it really had started to feel that this was now very much Part 2 of my trip, not only because I was well into the second half of my time away, but because from now on what ever route I chose to take meant that I needed to be working my way back towards Santander.

(If you missed Part 4 you can go back to that by clicking here, and there are also links here back to Part 1, Part 2 and Part 3.)

Clicking on any of the picture in this Blog will either expand the picture or open a scrolable gallery depending on the device you are using.

I wasn’t in a great rush to leave Los Moriscos so as with the previous day I sat and enjoyed another chat and a couple of cups of coffee with my host Milo, before doing that I had already brought my bike round to the front of the hotel and clipped on the sat nav and tank bag, with just my main bag still in my room to waiting to pack away my last few bits and pieces.

I had decided to head for Baza and booked a room at the Hostal Venta Del Sol, which looked to be another great value booking at just €27. My communication with the Hostal the previous night had seen me letting them know I would be traveling by Moto and somewhere to park my bike would be appreciated – the reply from them was almost instant and was “don’t worry we will give you a garage” – which sounded better than good.

The town of Baza is located in the province of Granada and so still in Andalusia, if I had gone directly it would have only been around 130 miles or so, but of course I had no plans to go directly and plotted a route that added a few miles on and probably ran out at about a leisurely 170 miles or so and would take me towards the edges of the Sierra Nevada National Park.

As with every other day on the trip the weather was set be excellent, and the first part of my journey took me back on the wonderful roads in the direction of Loja, initially the AP-46 and then the A-92M.

Despite having done some of these roads the day before it was hardly a hardship to ride them again and even though the roads appeared to take me away form my destination it was a conscious decision on my part to do so, and if you look in the picture gallery above you can see a couple of screen shots of roads from my iPad – it just wasn’t at all difficult to make a good route.

I had another fine days riding and was at my accommodation around 4pm or so, and although they had said they would give me a garage, I’m not so sure that i actually expected an individual garage just for me, but that was exactly what I got when I checked in – Garage number 10 at the rear of the hotel.

The accommodation was decent, relatively basic, but comfortable and secure with decent air conditioning, decent bar and only a 10 minute or so walk into the town itself –  which was where I headed once changed and refreshed.

Back at the Hostal I had another couple of beers before heading for bed but not before spending a few minutes booking my next place …. a goat farm in a place called Hellin a few miles on from Canada de Agra which was a similar relaxed distance to the journey I had made to Baza.

The place I booked was actually called the Hotel Bella Hellin. The description of the hotel was intriguing – a four star hotel that was eco-friendly and that was also a goat farm. The hotel was priced at  €54 and got fabulous reviews and ratings – how could I not book a stay on a goat farm.

My ride there was simply brilliant and took me on a real mix of roads.

There was a stretch of about 30 or so miles (I think) that were relatively slow and needed a bit of care, partly because of the road surface but also because the views to my right were almost impossible not to be drawn to and in so doing running the risk of being distracted longer than I ought to have been. It was just majestic.

As with previous days, with no timescales to meet and no one to think about but myself I really made the most of the roads, the scenery and a few decent stops for refreshments along the way.

Arriving at the Hotel was interesting, I had to ride across a loose rocky surface and then down a short incline to the hotel (all without any sign of a single goat).

The owner came out to meet me and wasted no time at all in getting me a cold beer whilst i sat down in the hotels pleasant and elegantly decked out restaurant – despite my hot and unkempt appearance I could not have been made more welcome.

The owner was an absolute master with Google translate and we communicated fairly easily After I had my beer, he didn’t so much show me to my room but showed me to my suite!

It was large, comfortable, superbly furnished and at less than £50 top value – and the shower was probably the best of the trip.

I really cant speak highly enough about this place, I suspect that in time to come, the road down to the hotel will be better surfaced, it looks like they have work in hand on various aspects of the place.

It’s quite isolated and quiet, which more than suited me and although the restaurant was set to close on the Sunday evening that I was there the owner opened for me and really could not have done more

And yes it really is a goat farm, and anyone that was following me on social media may well recall some of the goat related jokes that were knocking about at the time!

Although not being much of meat eater I declined the roasted goats legs that were offered to me, but did sample the red wine sourced locally from the house of Don Simon and which was delightful – who on earth could ask for more.

I loved my stay here, it’s certainly a different sort of place and I slept incredibly well before setting of for the last two stop overs of my trip before finally heading back to Santander and the ferry home, which you can catch in the final part (Part 6) of this Blog