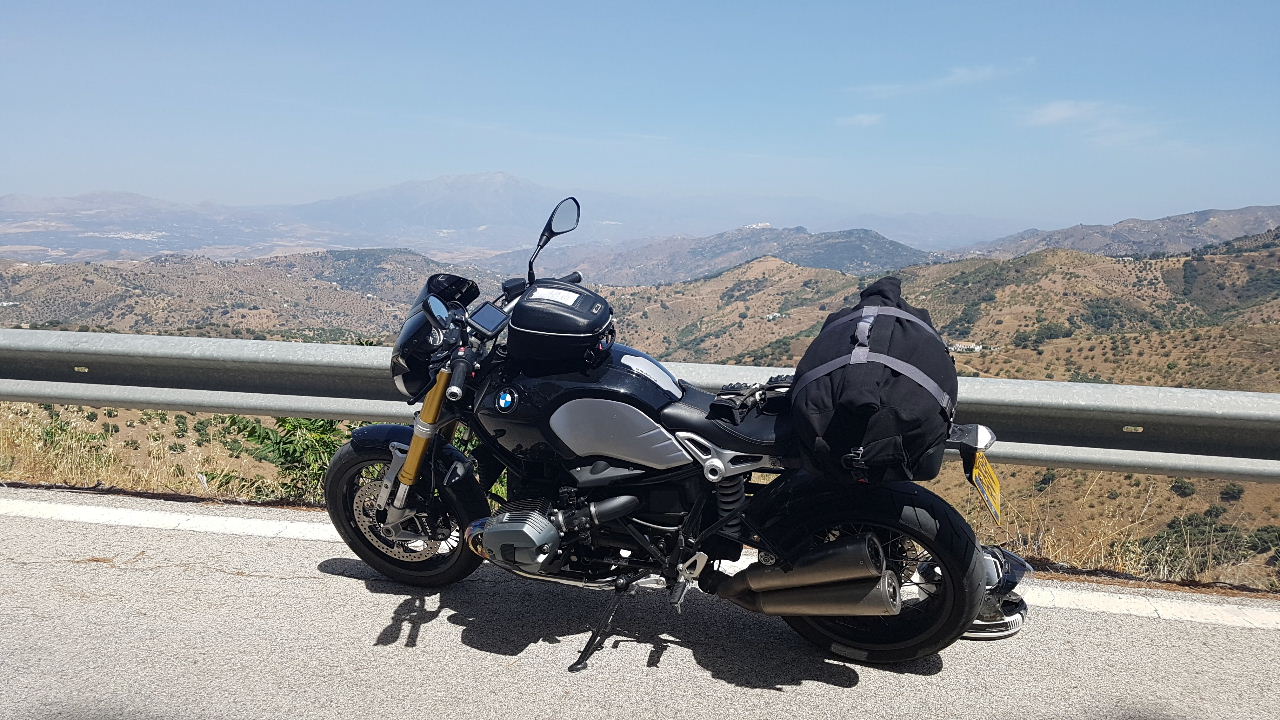 Previously in this series of Blog posts I’ve written about my travel from Santander down to Jerez in southern Spain, (you can go to Part One by clicking here).

The trip up to this point had been superb and had more than met my expectations. Roads had been great, weather superb and I had enjoyed the different accommodation that I had found …but it was actually set to get better.

I had decided to continue in Andalusia and was partly inspired by a few words I had read on a website, but can’t recall which one , and that described the road that runs from Malaga to Colmenar as ‘the road to heaven’. Clearly that’s quite a claim but the thought of riding a road described as such was enough to prompt me to check it out.

Sometimes it’s funny how things work out, it was because of what I had read – that some time previously I had written it down in my ‘trip notebook’ as a possible place to go, and as I was flicking thorough my book whilst having a beer in the Ibis at Jerez I looked up Colmenar and decided to book two nights at a place called the Casona Los Moriscos, which was actually just a shade under two miles outside of the small village of Colmenar, which itself is set in the mountains on the edge of Montes de Málaga nature park.

It was to provide one of the best accommodations of my trip and is a place that I can more than recommend for bikers if down that way, but I’ll come back to Los Moriscos later in this post.

Despite the Ibis not being my normal sort of place to stay, it had been decent enough and the breakfast good enough to set me up for the day – as with previous days it was set to be another scorcher down in southern Spain.

It was easy enough navigating out of Jerez and my route took me towards Junta de los Rios, Arcos de la Frontera, El Bosque, Ronda (vai the A373/374 and 373), then Cuevas del Becerro (A367) onto Carratraca and then towards Malaga and as ever I was almost overwhelmed with fine roads and stunning views. (Clicking on any of the pictures in this post will expand them or open a scrollable gallery depending on the device you are using)

I had a few stops in charming villages and roadside bars and for the most part the riding was easy and relaxed. A good chunk of the journey was on relatively flat and open roads – and although at times the scenery was less dramatic, the light and space of the open plains was spectacular in its own way – and added to the sense of being on my own, which I enjoyed.

Eventually I neared Malaga … I’ve never been there before and to be honest I had no intention of heading into the main tourist area, I know from what I have read that Malaga has many good things going for it, but the prospect of going somewhere where there might be places serving a ‘full English’ to tourists recovering from the exertions of the previous night wasn’t for me.

Those words are written with me having never visited and I accept for that they may well be worthless, but that’s what was in my mind and the reason why I found myself clipping though the suburbs with its high-rise accommodation and an extraordinary amount of graffiti so that I could find the start of the ‘road to heaven’ the  A-7000.

I wasn’t let down. The road itself is about 27Km and it climbs up the mountain pretty rapidly with a couple of corners that loop back on themselves (360 degrees). This was the old road that linked Malaga to Granada and according to legend was prone to highway-men, not that I saw any, although I did meet an interesting guy called Ron at a bar half way along the A-7000, a Dutch national who had moved to this area some five years ago and was as chilled a guy as you could meet.

By around 16:00 or so I reached Colmena and soon found my accommodation. My host Milo was welcoming and sorted me out with a cold Czech beer almost immediately on my arrival.

Milo turned out to be a genuinely fascinating guy – a Slovakian who spoke: English, Spanish Russian (and German I think). Not only that Mile is an ex-biker, easy-going and knows a thing or two about the hotel industry. I simply couldn’t have been made more welcome.

The place itself is more than interesting – and quite a revelation when you go inside, talk about appearances being deceptive.  I can’t speak highly enough about this place and it’s ideal for bikers, great host, bikes are secure, quality accommodation and surrounded by fabulous roads and at a little less than £40 a night (and there were cheaper rooms), great value as well.

Had to smile though when a guy rode up on a horse, had a glass of orange and a fag then rode off … like you do I suppose.

As I had booked for two nights I started the following day by taking coffee on the patio with Milo. I wasn’t in any rush,

My only plan was to have a relatively lazy day and other than turning left, taking the first right hand fork in the road and heading up into the hills towards Loja and then towards Motefrio I really didn’t have any idea where I might end up.

After climbing onto the hills for a few miles I turned off the road to ride slowly through the olive groves, on a road that was more like a B road than anything else before returning to the better surfaced roads that just like almost everywhere else were simply magnificent.

I had started the day off with my right hand mirror in the tank bag as it had worked loose and I needed to borrow a spanner to fix it, which I got sorted at my first coffee/cold drink stop (although I ended up with a wrench rather than a spanner but it did the trick) and I went on to have a superb day, lazy stops for drinks and idling the time away with seemingly endless stunning views.

Despite coming back with plenty of decent pictures I don’t think they quite capture the scale, colours and space of all that I saw.

I was back at Casona Los Moriscos (House of the Moors) by about 16:30 or so and sat out with a beer before taking a shower. Milo is a keen music fan and his choice of music (that he streams to his outside speaker via his Spotify playlist) was just perfect after the days exertions.

Once showered and feeling fresh again it was back out on the patio for another couple of beers and something to eat – and as this place had been so perfect and peaceful a stop over and one that I had been really happy at, I decided this was the ideal place to tie a ribbon that I had carried with me and in memory of my Dad who had passed away just a few weeks previously.

So if you’re ever out that way there should be a yellow ribbon tied around one of the plants just outside the entrance.

It was just after tying the ribbon that there was the distinct sound of bells …  and the road past the hotel was swarming with goats being taken off somewhere to do what ever goats do at that time of the evening. It’s funny though how things work out as goats were to feature again on my trip … but more of that in Part Five. You can go to Part Five by clicking here

Go to Part One by clicking here

You can go to Part Five by clicking here