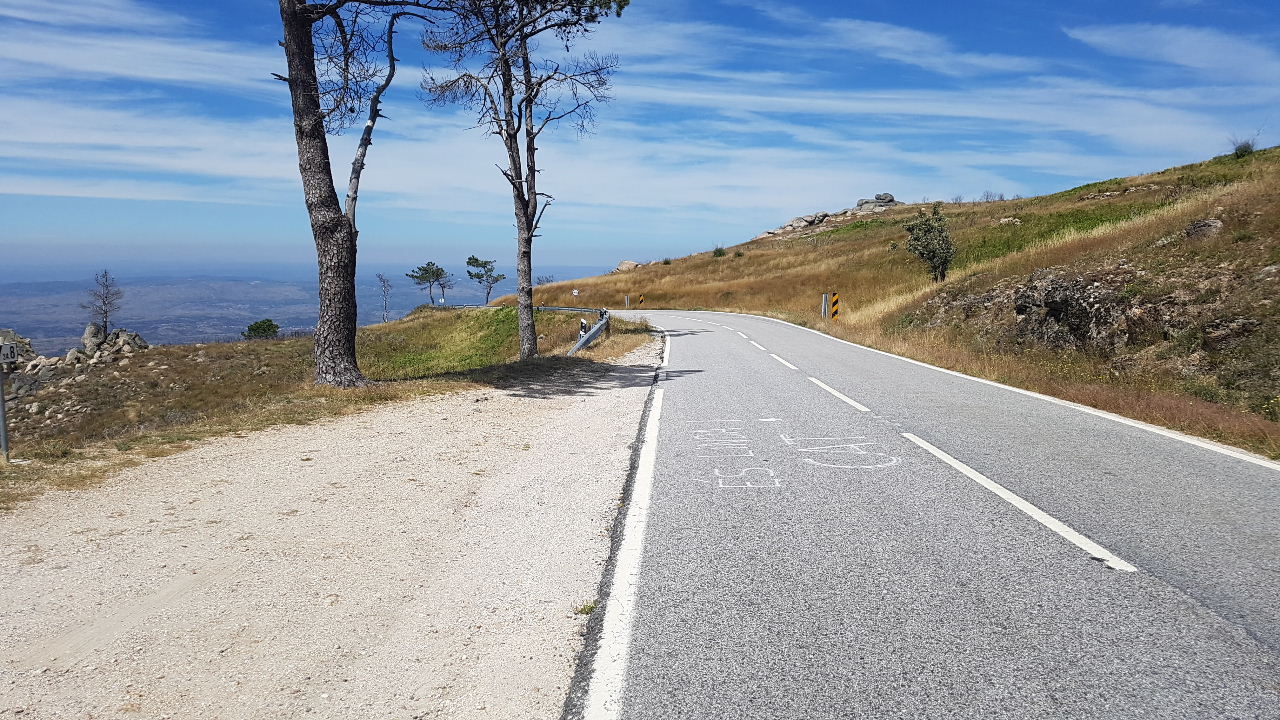 This is the second part of the Blog post covering a recent trip to Spain and Portugal. You can read Part One, here. After leaving my accommodation in Boca de Huérgano, I decided to head for Sobrado a small place in Galicia in the north-west of Spain.  I made a booking at the Hotel Rural Pescadores, and got the place at a good price, just €27 for bed and breakfast, which at face value looked even better than the €45  a night I had just paid at the place I was leaving.

As I was loading my bike I met two other bikers – a father and son, both called Jose. They were on a short three-day road trip together and like me had decided to stay two nights at the same place that I was about to leave. We chatted for a short while and asked about each others trips, they were both on fairly old (and relatively battered bikes), but they reckoned they could fix anything that might go wrong with them and they were looking forward to a day in the Picos before setting off in the direction of Potes. I set off in the opposite direction and headed back the few miles to Riano, then Cremanes, Sabero and Bonar before heading for La Robla and Bembibre and a few places in between. The weather and the roads were just perfect and the almost complete absence of traffic made for another superb ride.

As you might expect I stopped plenty of times, either to take pictures or to just admire the incredible scenery along the way and of course a few stops just to take a coffee and a cold drink. The weather was hot – and was around the low 30s by lunch time, creeping up to the high 30s by early evening.

I’ve done a good number of miles in Spain in recent years and I don’t think it’s a place that I could ever get bored with riding in, nor do I ever think I will lose that genuine sense of wonder at just how fantastic and empty the roads are.

It’s so hard to capture it all really, no matter how many times I stopped to take pictures it seemed that as soon as I rounded the next bend there was an even better view or better road. At best the pictures give a flavour and I knew that the roads I had been on so far would themselves pale compared to the roads that I expected to ride later on in my trip.

Sobrado itself was a really small place with some narrow and steep twisting streets that at times needed a bit of care to negotiate safely. My accommodation was better than good, and at €27 was superb value – plenty of space, beautifully furnished, excellent air conditioning and a first class shower – which I was in need of by the time I got there.

The owners of the hotel also own the only bar/restaurant in the small village, and that was a couple of minutes walk away from the hotel. After an exhilarating and warm day on the bike, once showered and changed I went for a quick wander around but didn’t delay too long in taking my first beer of the day, and not for the first or last time on this trip just sat and reflected on just how good it all was.

I had decided that after Sobrado I would move onto Portugal and booked a place called the Hotel Berne in Manteigas in Portugal.

Before leaving home I bought the latest edition of RIDE magazine so as to get hold of the Spain and Portugal supplement that was included with that edition, and it was whilst reading that whilst lying in bed that I decided that if the accommodation in Manteigas was any good, I’d probably book a second night as there looked to be more than a fair share of stunning roads in the Sierra da Estrela mountains, and one road in particular that the RIDE magazine supplement described as the Portuguese Stelvio (the N-339), I reckoned if it was as good as the magazine suggested then I needed to make sure I didn’t short change myself by not allowing enough time.

Having said that, I’ve done the Stelvio (when I did a decent Italian trip a couple of years ago – click here if you want to read more about that) – and to be honest thought it one of those roads that’s a little over rated.

At the same time as providing some of the most iconic motorcycling views you could ask for and an incredible succession of hairpins as you head up to the top and then down the other side – I also thought the amount of effort required outweighed the riding pleasure – it just wasn’t the sort of road that I got a good ‘flow’ on. That aside I’m glad Ive done it and still reckon it should be on the ‘to do’ list of most bikers.

My ride down to Manteigas was just excellent – I headed first for Obarco, then on towards Petin, Viana do Bolo, Vinhais, Zolo, Trancoso, Gouveia and then Sao Juliao before eventually reaching Mantiegas and the Hotel Berne.

The reason that I had headed for the hotel via Transcoso was to take in one particular road the CL232, and it was more than worth the effort, it’s a glorious road that twists and snakes across the landscape as it climbs high into the mountains.

By this time and even before reaching my hotel I had pretty much decided that I would definitely be booking a second night, it was clear to me there were plenty of roads in this area for great riding.

The Hotel Berne was a bigger hotel than I would normally check into, but with good reviews, good parking and good WiFi it seemed to fit the bill, and it turned out to be a really good place to stay and I had no problems booking a second night.

Showered and refreshed with a cold beer I wandered into the town – which was a real effort as the streets were all remarkably steep and the temperature was still around 28c in the evening.

I hadn’t been troubled at all by the heat when I was riding but it’s true to say that I probably wandered around the places that I stayed in less in the evenings on this trip than on others – it really was an effort in the evening heat. Back at the hotel after having had something to eat I washed through some clothes and hung them out to dry on a makeshift washing line (bungee strap)

The following day was just out-and-out enjoyment – with the N339 being the highlight. It was hardly an effort to sort out a decent route, Google maps and the Ride magazine supplement threw up plenty of options.

I suppose the single exam question would be – so was it better than the Stelvio?

The simple answer is yes. My evening meal involved no more than wandering to the local supermarket for some bread, cheese and beer, sat out on my terrace I reflected again on the days roads and the blistering day on the bike that I had enjoyed. Already the thought of coming back here next year and maybe spending a bit more time in Portugal was starting to run through my mind…