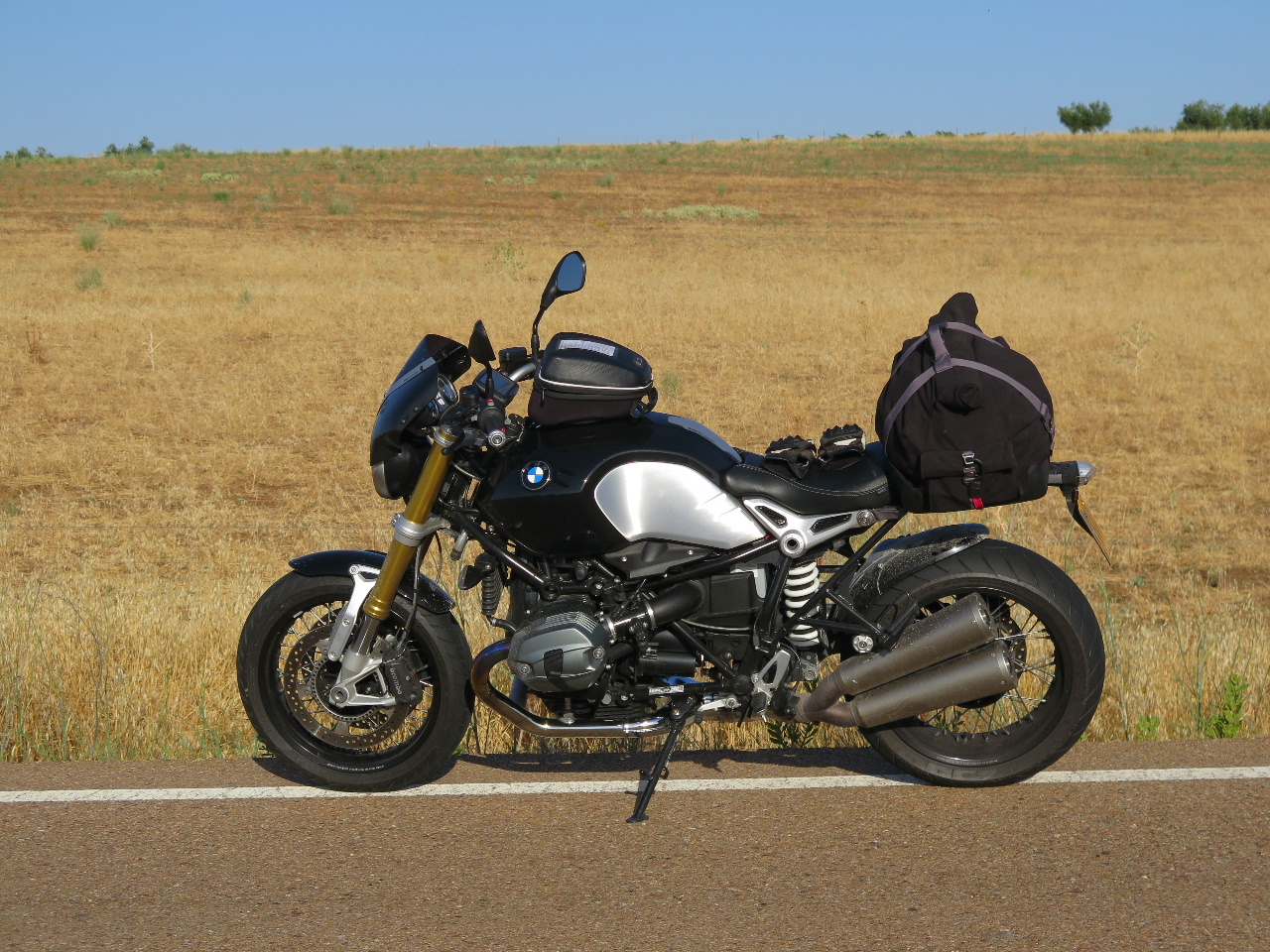 Having spent two nights in Mantiegas at the Hotel Berne I decided to move on.

In truth I could easily have stayed longer, in fact I had already started to think about maybe returning there in 2019 and making it my base for maybe three or four days, and that’s not something that I would normally do – but the accommodation was good, the location excellent and the roads sublime.

You’ll know if you have read the earlier parts to this Blog that it had been the N339 and the roads of the Serra da Estrela mountains that had drawn me there. If you want to check back you can read Part One here and Part Two here.

The destination that I had decided to head to next was Don Benito, and I had booked a room at the Hostal Restaurante el Paraiso. The el Paraiso was set on a main road, the EX206 and to be honest didn’t look to be in the most glamorous location, but with WiFi, a bar, a cafe/restaurant and being conveniently located on a route that would take me down to Jerez it looked like it might just be ideal – and the €26 price looked to be fine value.

Don Benito itself is in the province of Badajoz in Extremadura and I had decided to head that way as I knew that I could make a good route through the region, a close look at the maps indicated that there were plenty of remote areas with mountains, forests and lakes – being contained in at least two National Park areas.

I was on good roads literally within a few minutes of leaving the hotel – in fact I was back on the N339 heading for Covilla and then making my route via Fundao, Orca, Piedras Alba, Valdefuentas and then finally to Don Benito.

It was probably a journey of two halves, or more correctly a journey of thirds. The first third of the journey was in the mountains on excellent roads for a bike, the second two thirds or so were across the wide open plains of Spain and Portugal in what was another wonderfully hot day with midday temperatures around the 36c mark – the weather was set to get warmer and there had been local weather warnings for Extremadura and the Iberian peninsular of temps’ reaching into the mid and high 40s.

I had only been on the road for about 20 minutes or so when a ‘phone call came through on my headset, and it was from Booking.com with information about my booking, my initial thought was that this was going to mean there was a problem, but in fact they were just passing on a message from the owner of the el Paraiso hotel who himself had responded in connection with my request for somewhere to park my bike – the message was “don’t worry if he meets me there after 17:00 I’ll sort parking out for him” which I thought was a nice touch.

As with previous days on this trip I was pretty diligent when it came to taking onboard fluids, although as a ‘safety precaution’ I always had a bottle of water with me, it really was only as a back up, the reality of the super hot temperatures meant that on the odd occasions when I did use it it was pretty warm water that I was drinking, in practice then I typically stopped about every 90 minutes to two hours or so, which I would have done anyway really – I wasn’t in any rush and had no fixed plans or bookings to get to – only what I had decided the night before. In fact not having any schedule to meet meant that there were at least a couple of occasions on this trip when I turned back and did the same stretch of road a couple of times!

When I did arrive at the el Paraiso, location wise it was as I had expected – just off a main road and wasn’t the sort of location that would make for picture postcode views BUT the owner was helpful, led me to the back of the hotel, down an incline and into his own large underground garage and general store area for the hotel.

My room was comfortable, good air conditioning and shower and with a shaded patio area to the front of the hotel this stop proved to be great value and ideal, in fact despite the budget nature of the Hostal, I probably had the comfiest and best nights sleep of my trip and would wholeheartedly recommend it as a safe and convenient stop over. Although I wasn’t looking for the cheapest places, its worth noting that ‘Hostals’ which are really a sort of cross between a hotel and a roadside motel are plentiful in Spain and if you did want to travel on a budget this would be one way of doing it, in my case I just booked into places that suited the route and direction I was going in – the net result was that staying in a few places like this really did bring the average cost of an overnight stay right down – but I’ll come back to overall costs in the final part of this series of Blogs.

The following morning I was headed for Jerez, or to give it its proper name – Jerez de la Frontera which is down in southern Spain and in the Andalusia region, the weather forecast was for potential record-breaking temperatures in this part of Spain, with some places tipped to reach the top 40s!

I headed for Jerez via Guarena, Villafrance de Los Barros, Monesterio, El Ronquillo and Maribanez and this was to be the only day on the trip when I didn’t stop and take as many photographs as I normally would – it was just too much hassle taking my gloves on and off. Whilst my body temperature was fine, my hands were sweaty hence the hassle with gloves on and off and it prompted me to make a mental note that the one bit of my kit that I needed to improve was my gloves and I decided that once home I would look round for a thinner and better ventilated pair.

Today was probably the only day when I didn’t really get my route quite right and I ended up in way too much traffic in Seville, and with an air temperature of 44c and even higher temperatures stuck in traffic then I ended up being much hotter than I wanted to be.

Added to that was my own lack of familiarity with the traffic system in Seville which meant that on some occasions I choose not to make some of the turnings that would have got me through quicker, instead I chose ‘safer’ turns even though I knew I was adding to my time in the intense heat and actively choosing lack of opportunities to increase the air flow. To be honest some of the junctions just left me confused.

My stay in Jerez was probably as un-authentic a Spanish experience as you could get in the same way that taking a resort based holiday in some far off place is sure to have its value but perhaps doesn’t always give much of an experience or insight into the culture of the country visited.

I had booked into the Ibis in Jerez – simply as a matter of convenience, Jerez was on my route and it was the following day that I was really looking forward to.

Having said that and in all fairness the Ibis was fine – they are what they are, bit like a Premier Inn or a Travel Lodge, there’s some re-assurance in the consistency of the experience, and just fine as a stop over but you wouldn’t book one for a holiday.

The usual routine of shower and beer was in place, then a bit of a wander for something to eat but it was super hot and walking anywhere more than a few hundred yards just left me dripping with sweat. After eating and returning to the hotel my exertions didn’t get much further than sitting by the hotel pool, sipping a few beers and sorting a route out for the following day … and my plan to ride the A7000 in the mountains above Malaga.

Great blog. I’ve just bought my R nine T, having owner lots of different bikes before, and really fancy doing a trip like this. I have never done a trip before and am interested in to hear some of your advice. Cheers, Andy (Hampshire UK)

Andy – the RnineT is one of the best bikes I have toured on … and I’ve toured on a few. I’ve got another couple of parts of the Blog to write up, and then the final part (probably Part 6) will be a round up of general things, and will include some thoughts on the RnineT. I’m more than happy to provide you with anything that you think might help and I’ll drop you a line at your hotmail address shortly. Regards. Tony