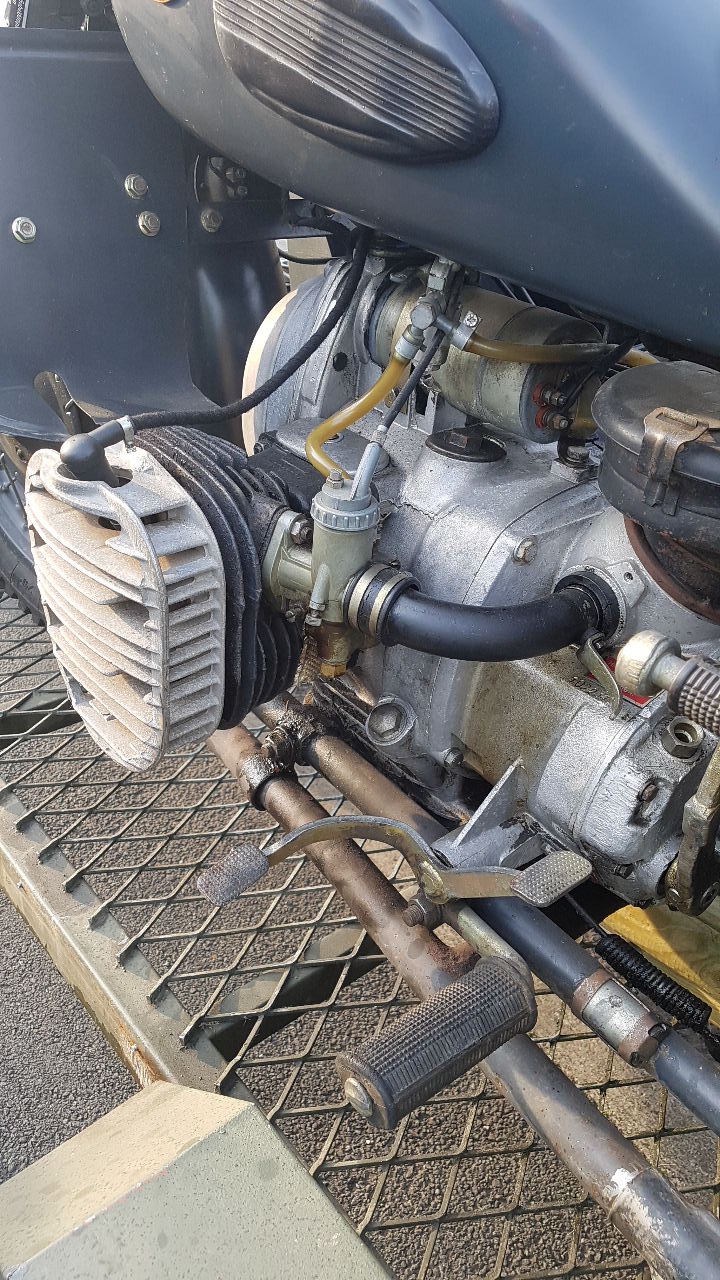 You never quite know what you are going to stumble on, and yesterday evening as I was returning from a walk I saw a couple pulling up outside their home pulling a trailer on the back of their 4×4 – and on that trailer was an intriguing old bike.

Perhaps not surprisingly and like most people who are passionate about something he was only to happy to chat with me about what was on the trailer.

My interest had been drawn on two counts: firstly it was a motorbike and secondly it was unmistakably an old BMW.

It turned out to be a 1941 R71 that he had taken, along with his wife to this years Tatton Park Country Show.

It turned out that he collects old military vehicles and over the weekend he had been part of a group that display old German wartime vehicles complete with full camp set up, full uniforms etc and display the equipment and vehicles as they would have looked during Second World War in France.

I understand that the bike itself was mostly original, although it is fitted with some Russian parts and some other bits and pieces have been fabricated and added over the years.

The engine is 746cc Boxer with four speed transmission and as you would expect is shaft driven and outputs around 16.4kw (22bhp) at around 4,600 rpm.

I was curious about a ‘gadget’ mounted on the sidecar and the owner explained to me that it’s something called a Notek Lamp.

I did a quick bot if research on the web when I got home and it transpires that many German wartime vehicles were fitted with one of these for night riding/driving.

Interestingly the unit itself takes its name from the Nova-Technik GmbH company, that manufactured them in Munich. It would have originally housed a 35-watt bulb under the hooded housing and this shone  backwards, against a mirror.  The light was then reflected onto the roadway from under the hood of the lamp. Impressively it would light up the road for about 100 to 130 feet ahead of the vehicle in an 80′ arc.

There were three settings; dim, medium, and full. The dim setting made the vehicle’s light invisible from the air at altitudes above 2,000 feet. Lights on the full setting became hard to see at over 6,400 feet.

Clearly things have moved on a bit since then, although it’s fair to say that there can be few of us riding RnineT’s now that need to be concerned about visibility to hostile forces from the air!

On top of the petrol tank was a small panel that opened, the panel itself has a schematic diagram of the bike fastened on to it, this opened up and was originally used for small spare parts and spark plugs – although in its use at the time of manufacture it wouldn’t have been carrying NGK spark plugs!

The sidecar was fitted with an attachment for a machine gun and the owner explained to me the different type of guns that were fitted.

There was of course a familiar look to the engine, smaller than the RnineT, not quite the same shape cylinders – but a Boxer engine nevertheless.

All in all it was a pleasant way to end my Sunday evening walk.

A visit to the RSPB site at Burton Mere wetlands

Pink pigeon – it’s not everyday you see one of these