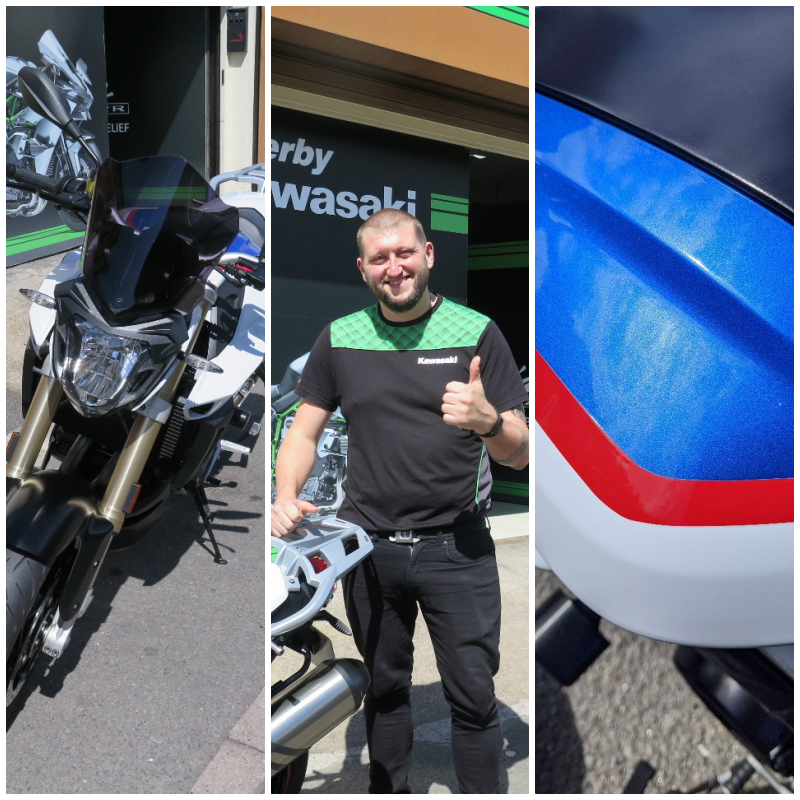 The first question Jack (from Deby Kawasaki) asked me when I arrived on Saturday to collect my BMW F800 R  was “are you excited”, it was a question that in all honesty he could have easily predicted the answer to – any day when you collect a new bike is a good day and a time for excitement.

Prior to buying this bike, the Kawasaki dealer in the small village of Borrowash wasn’t one I had heard of.  Although I have had a couple of Kawasaki’s (Z1000SX and Vulcan 650S) they were both bought from dealers closer to home.  Before finding the dealers I have to admit I had never actually heard of the village of Borrowash, which turned out to be in Derbyshire and to the east of the Derby city boundary, as I live in Manchester some 90 or so miles away there was no particular reason I would have either heard of it or had occasion to visit.

Finding them was down to one of those fortuitous ‘stumble across moments’ that came about as I had been sort of looking around at F800s for some time, and had in fact had been to look at one quite recently at a local independent dealer not so far from where I live. That in turn led me to generally browsing online and setting a search via  News Now Classifieds which basically sends an email when an item matching your search criteria pops up for sale.

My interest was fairly specific: an F800 R, low mileage, excellent condition, post 2017 model, in the BMW Motorsport Colours and a decent deal to trade my Kawasaki Vulcan 650S.  After one that met the criteria popped up (at Derby Kawasaki) I dropped a message through the web portal, a day or two later got a ‘phone call from Jack, went over a couple of days later and then again went over on Saturday to collect the bike.

I’m really pleased with the bike. It more than matched the criteria I had set and although it’s not brand new, having done just 1,800 miles, it is in absolute pristine/near showroom condition and really is one of those that’s ‘as good as new’, and it has a few extras on it as well – a tinted Puig screen, Puig hugger, R&G Aero style crash protectors, seat cowl, BMW rear rack and pannier rails and the previous owner had even been decent enough to leave the Haynes manual that he had bought for it.

The quality of preparation of the bike was simply first class – but just as important was the quality of service that I received on both occasions that I visited, that also was first class.

Clearly we are not in ‘normal’ times, Covid 19 restrictions have the potential to make any visit to any retail establishment more of a chore than a pleasure but despite needing to wear a face covering, take additional hand sanitation measure, sit behind a screen when formalising the paperwork – none of that got in the way of what really was an excellent customer experience.

It turned out that the company had originally started out as Moby Dicks Scooters Ltd but now trades as Derby Kawasaki and have been around for over 20 years., and in fact in 2018 won the MCN  Dealer of the Year award!

It seems a really good set up with a very decent selection of machines on display, unfortunately due to the Covid 19 issues I didn’t get to spend as much time as I might have done browsing the bikes nor did I get to see the clothing and accessories section on the first floor.  I dealt with a couple of the staff there and they were both friendly, professional and helpful – it was Jack who I had most dealings with (and who you can see in one of the pictures in the gallery below) – and I don’t think I have ever had as smooth and easy a bike handover in the past – thanks Jack.

The ride home was enjoyable despite running into a couple of really torrential rain storms.

I headed initially up the M1 but then off at Sheffield to finish off my journey on the A57 Snake Pass, which due to me heading for a petrol station that I had last used over six years ago (when I was based in Sheffield) and finding that it’s now actually a Tesco Express meant that my first ride on the bike assured me that I can do at least 22 miles on the fuel reserve!

All in all I can more than recommend Derby Kawasaki as a dealer to check out whether online or in person, it’s certainly easy enough to find and isn’t so far off the main roads and is located between Nottingham and Derby, just off the A52, Junction 25 of the M1.

Next up will be the fitting of the Sat Nav and battery charger lead and some time to sort some luggage out.

Most recent posts are at these links

Or check out the Lockdown Lookback – The Motorbike Years series;

[…] Motorcycling in the High Peak – BMW F800R. I had a couple of hours free this morning (Sunday) so made the most of it with a few hours out in Derbyshire, in and around the High Peak on my BMW F800R. […]