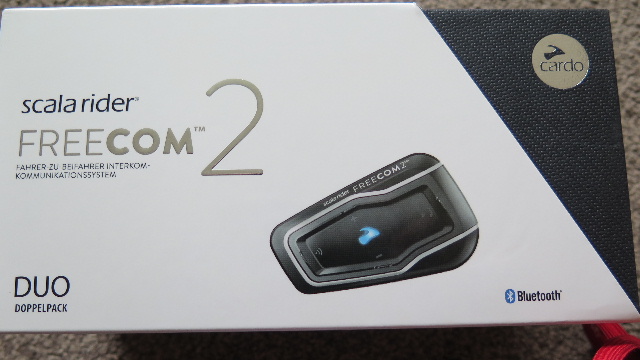 Back in May I bought the Cardo Freecom 2 Duo motorcycle intercom and I thought that it would make more sense to use it for a while rather than post a review before giving it full use.

I had a good look around the web, reading reviews and so on as you do before deciding which to opt for and eventually settled on the Cardo and purchased it online for about £60 less than the £280 or so retail price in a local bike store.

First impressions when opening the box were good. It seems that Cardo have adopted an almost Apple style of packaging – and although that’s hardly the most important thing it is nice to unpack something that has been so thoughtfully and well packaged.

Although the units can be connected to Sat Nav’s, phones and music devices none of those features were key reasons for my purchase – I had bought it primarily so that my wife and I could use it as an intercom when she is riding pillion and do away with tapping on the shoulder, sign language or just plain old shouting.

Part of the pleasure (for me) of riding bikes is the solitary experience that it provides, so it wasn’t a case of always wanting to be connected, to be able to make and receive ‘phone calls or indeed to listen to music whilst riding – it was just an acknowledgement that being able to talk easily with my wife when she was riding pillion was something that I wanted to do especially when we were thinking ahead to longer trips and our upcoming trip to Spain/Portugal.

There is certainly plenty of choice when it comes to buying an intercom – choice in types and choice of manufacturer and each come with a fairly broad price range. You can still purchase acoustic intercoms that don’t need wires or batteries, intercoms that use wired systems, connect via wireless and of course those that connect simply via Bluetooth.

The FREECOM 2 DUO falls into the latter category and therefore is a Bluetooth connected device and the package includes two units that come pre-paired, which makes for a quick and easy set up.

Fitting the intercoms into our helmets was pretty straightforward – we both have Arai Chaser V helmets and it was more or less a case of removing the cheek pads, seating the slim stereo speakers and routing the wires neatly underneath the lining.

The units come with a choice of microphones, a fairly regular type for full face helmets and a boom microphone for open face helmets.

There’s also an abundance of stick on velcro pads for mounting the speakers and microphone and to be honest as long as you take your time then it’s a pretty easy task. Having said that it took a couple of attempts (trial and error) to make sure the speakers were placed in the correct position and were not putting any pressure on our ears.

The Bluetooth connection has proved to be a breeze – simply a matter of switching both units on and within a few seconds they are connected, as is GPS and mobile phone and there are voice messages on switching on that confirm what is connected.

Communication can be voice activated or as we have found to be our preference, we leave the channel open for the duration of our ride by simply making the first communication by pressing on the front of the unit.

One of the other neat things about the Freecom is the ability to store a favorite telephone number that can be activated by simply tapping the unit, you can also make calls via voice activation or by using any contacts that you might have on your GPS unit.

I’m not going to write more about the technical specification – there’s plenty of information on the web – I thought it of more value to say something about how it actually works in practice.

The intercom has worked pretty much perfectly and in my opinion has already been worth the money – we’ve used it on one day rides and I also used it when traveling in Europe on a recent 3,700 mile trip, so it’s fair to say its been reasonably tested.

Communication is crisp and clear and there are no issues with rider/pillion communications up to around the 70/80mph mark, after that there are some issue with wind and general ambient noise – bit overall we’ve been incredibly pleased and satisfied with the unit although there have been a couple of occasions when my wife has offered to sing to me … on each of these occasions I haven’t held back in making my feelings known in that respect!

I used the ‘phone function a lot whilst I was away and the clarity was remarkable – and my wife was not aware of any road, wind or engine noise other than on one occasion when I was accelerating rapidly through the gears as I headed into a national park in Austria, and it didn’t seem to make much difference whether I had my visor open or closed, it was always clear.

The link to the sat nav is just superb – I have a Garmin 590 and there have been no connection issues at all.

I have found the real value of that to be the use of the voice instructions when in unfamiliar places.

Removing the need to glance at the sat nav screen, when full concentration is needed is an obvious advantage – there were at least a half dozen times when I was traveling and really needing my wits about me when I was more than glad that i was getting the crisp voice instructions in my ears.

As an aside listening to the sat nav pronouncing some of the roads when I was in Poland, Slovakia, Slovenia and Bosnia was brilliant and made me smile on a good few occasions.

Battery life seems impressive and apparently has a talk time of 13 hours, in practice I don’t think we have ever got close to draining the batteries. The units can be left on the helmet to charge (via USB) or simply removed (I’ve found it easier to remove them).  I had my share of rain a couple of times and there have been no issues with the units being drenched.

I cant really comment on using the radio or music functions as its not something that I have any real interest in doing but I have no reason to think its anything other that up to the mark.

There an app for PC, iphone/ipad and Android and although there were issues with an early versions of the app’ it seems they have been resolved and I haven’t had any problems – the app is used for setting volume, favorite telephone number for speed dial and various other bits and pieces and I have found it be pretty intuitive.

Like anything new there’s a learning curve but its not a steep one and the handy pocket guide is really all that’s needed.

I cant comment on how the Freecom compares to other similar type units on the market but what I can say is that we have had no problems at all with ours and reckon its a really good and worthwhile addition to our biking kit – as long as my wife remembers not to sing to me!