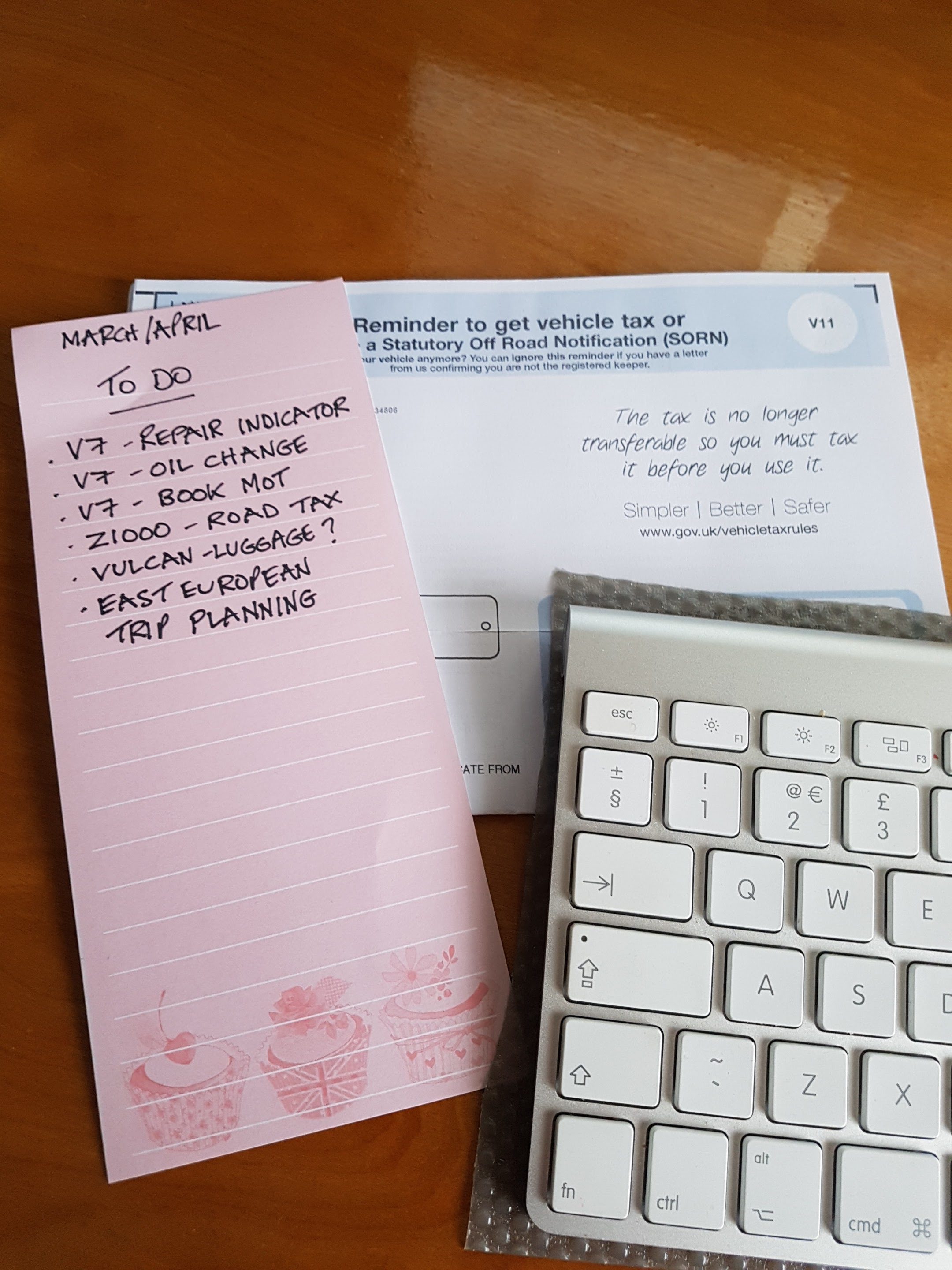 I know some people ride all year round whatever the weather conditions,  I make no apologies for not being  one of them, but now that  March has passed and April is here it’s certainly the time of year when my riding season starts, and I can’t wait.

It’s always the time of year that for me is a full of anticipation along with the need to get a few practical tasks done.

Quiet March. Looking back over the last month then it’s fair to say March was a pretty quiet time for me.  My biking involvement stretched only to  visiting the annual Manchester Bike Show at the back end of the month, and watching the first race of the Moto GP season on TV.

The bike show in Manchester was pretty good, the timing of the show is always ideal as a sort of ‘warm up’ event for the coming biking season. If you missed my Blog posts from the show you can still check them out – clicking here will take you to Part 1 (of 3) of my write up (along with plenty of pictures) and if looking at exhausts is your idea of eye candy then you might want to check out Part 2 … there’s plenty to look at.

In terms of anticipation I had pretty much managed to settle the last of my main travel plans for the coming year during February,  when I made the ferry bookings for my Easten European trip (that I will make at the back end of June). The ferry bookings for the Spain/Portugal trip that my wife and I will do together later in the year have been settled for some time, so all in all March came and went pretty quietly.

Getting ready to ride. In recent years there have been a few occasions when the the back end of the month has given way to some fine early Spring weather, unfortunately on the few decent days that we did get this year I had other commitments that I just couldn’t change.

With some free time on my hands last week I spent a few hours in the garage  getting the covers off the bikes and making sure they are ready for the coming months.

I took some time to check each of the bikes in turn, starting with the tyres, looking for any cracks etc and on the Guzzi V7,  checking that the spokes were all firm and without any visible problems. I also took the time to check the pressure in each of the tyres, the Z1000 in particular, seems to be more susceptible to poor handling if the tyre pressures are out than on any other bike I have had.

After that it was a check of the oils and fluids and happily all seemed to be in order. I knew the batteries would all be in good order as they are all maintained over the winter months on their own Optimate chargers.

With the exception of an indicator that needed repairing on the Guzzi everything else: lights, controls etc all seemed to be in good working order

In addition to keeping my bikes on the Optimate chargers over the winter I tend to make sure that they are each started up every few weeks, so there are never any problems when it comes to them being ready to ride. The bikes were all fired up last week and other than the indicator on the Moto Guzzi V7,  they are all good to  go.

I made a list of bits and pieces to do, the Guzzi is ready for its routine annual service and although I don’t rack up lots of miles on it I’m always pretty diligent about changing the engine and drive shaft oil.  I’ve got it booked in for its annual MoT this week, and whilst I’m not expecting any issues to come up I’ll still be glad when it’s done and cleared for another years riding, I’ve the road tax to pay at the end of the month for the Z1000 SX and I’ve got some luggage to sort for the Vulcan 650.

I suppose the lack of riding time over the winter months can easily lead to too many hours lost browsing online and I’m sure we’ve all got our favourite stores and sites. One of the online stores I’ve spent far too much time  browsing around recently is the bikebandit motorcycle parts store, .

The company is based out in San Diego and to be honest the online store is a bit of an Aladdin’s Cave,  its just all too easy to find an awful lot of stuff that you want … whether you need it all is another question, although with me and on the basis that there is nothing wrong with treating yourself then want often beats need.

In addition to a huge range of bits and pieces, whether its motorcycle tyres for your bike or whether its just under the general category of motorcycle gear there really is plenty to look at and plenty to test your resolve between want and need!

The web site also has a pretty decent Blog that I enjoy reading and if you’ve got time on your hands then I reckon it’s always worth a look at.

On the To-Do list. At the moment on the Guzzi V7 I’ve got some neat bar end mirrors that I’ve been thinking of replacing (mainly because I tend to catch them on the walls when moving the bikes around the garage), and whilst I was browsing around looking for possible replacements I found these in the store … problem is that although I was looking for something for the Guzzi, I actually think they would be a huge improvement over the OEM mirrors for the Vulcan S, there we go again … its that want versus need issue.

Now whilst the mirrors are definitely in the want rather than need category I really do need to sort some luggage for the Vulcan S.

The Vulcan S is a cracking bike and a real contrast to the others I have. Although only 650cc its got plenty of power and torque for two up riding and its the bike that my wife and I are using when we head off later in the year for a couple of weeks to the Pico Mountains in Spain and then down to Portugal.

I wont be buying the OEM luggage from Kawasaki it’s just way too expensive so I’ve been spending an age onlne looking at different luggage options.

At last I think Ive narrowed it down to about three possibilities and just need to make a final  judgment on whats going to work best for us, and where the compromises will be. I’ll write more about that in due course and once it’s sorted.

Just to continue for a moment on the Kawasaki luggage,  I find it really difficult to figure out how OEM gear is priced.

When I bought the Z1000 SX I got the tourer version which comes with colour coded hard body panniers. Even if I had bought them at a later date as an ‘add on’ they wouldn’t have cost me as much as the smaller panniers from Kawasaki for the Vulcan, and with a growing range of aftermarket luggage for the Vulcan at what seems like increasingly competitive pricing and I just cant see the manufacturers own range gaining much of  a foothold.

Just about the final thing I did on the bikes last week was to give them all a bit of a polish … even if they didn’t really need it.

Bring on the sunshine