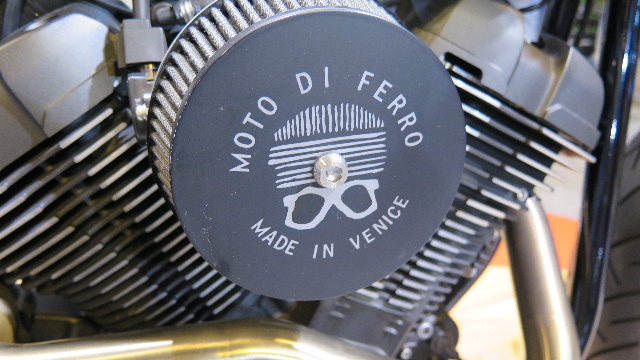 I wrote about  visiting the Motorcycle Live at Birmingham’s NEC in Part One and  have continued in Part Two  with some more words and pictures from the show.

It seemed that most of the major manufacturers were there.One absentee was MV Agusta, which was a pity really as the MV stand at a bike show is always worth a look. I don’t know if their absence from the show was in any way due to the current financial difficulties the company are having, but maybe with the recently announced investment from the Russian Black Ocean group there be some stability brought to the company and maybe we can look forward to seeing them next year.

Of the bikes on display I thought that the stands from Harley Davidson, Triumph, Kawasaki and Yamaha were the pick of the bunch when it came to how the bikes were presented and set out..

Yamaha: in addition to showcasing their model range, Yamaha had  a bunch of models under the Yard Built theme – a competition that had been run for their dealers to produce bikes based on the Sport Heritage range.

I must admit to a bias here as I just love the XV950 and it wouldn’t take a lot to convince me to buy one of those if I was able to. Some of the builds on the model were superb and enough for me to spend time drooling over them and going back to that stand for a second look before leaving the show.

The slightly odd thing and maybe an indication of how personal bike preferences can change over time, is that these are not models that I would have spent much time looking at a few years ago, let alone consider buying.

Of course there were plenty of other decent machines from Yamaha, with the regular line up of Sports, Adventure and Naked models but it really was the Yard Built display that caught my eye and in addition to that I thought they were really well displayed

Just next to the stand was that show regular Nick Sanders who I guess most folk are well aware of. He was previewing his Motorcycle Cinema at the show, unfortunately we were between presentations and so didn’t get the time to see it.

If you haven’t read any of his books then they are worth looking out for, as his journeys and adventures are pretty impressive, and although I have done about 15 or so European trips they really do look pretty tame in comparison to what Nick has done.

As a ‘professional adventurer’ he’s been in a great place for a few years to undertake fabulous trips, you just have to admire the tenacity and frankly the balls of the man to establish himself right up there.  Having said that, if you fancy a read of my book you can check it out information about it here, and buy it in electronic format on Amazon here.

Harley: I cant say I have ever desired to own a Harley but its fair to say that they did at fine job at the NEC with their stand and quite innovative display that featured their Jumpstart Experience.

This part of the display area was set up as a cafe/shed complete with seating area, coffee and DJ spinning discs at a mixing desk … it might all sound a little odd but to be honest I thought it worked pretty well.

Triumph: had done a sort of workshop theme for part of their display in Hall 2 at this years show. Some bikes were up on ramps, other alongside workbenches etc and it worked quite well. There was plenty to see with a whole a bunch of models from the Bonneville modern classics as well as the usual roadsters. tourers etc that they turn out.

I must admit I was pretty surprised when I realized that in the last 12 months Triumph have launched 14 new models in the UK alone!

Ive never actually owned a Triumph although my wife and I considered and went to look at a Triumph America earlier this year. As with Harley its not really a manufacturer that I am drawn to but clearly they produce a fine range of bikes and they did a great job of displaying them at this years show.

Kawasaki: I was really keen to visit the Kawasaki stand as I wanted to see the 2017 Z1000 SX.  As an owner of the 2014 model and having read various reviews in recent weeks it was pretty much the first model I looked for when I got to the Kawasaki stand.

I know its often said that size isn’t everything but if the size of your stand counts then Kawasaki were probably winners, it seemed huge and was visible from just about anywhere in Hall 2

There was a great display of bikes, including the fabulous Ninja H2Carbon … an awesome looking machine. In addition to the new bikes on show, there were a few old models, a Team Green giant video screen running, the Kawasaki Riders Club stand (recently relaunched) and information about the Kawasaki Rider Training Scheme, which seemed a pretty good idea to  me and there is more info’ about that here.

I gather that one of the Team Green stunt riders was at the  show  and performing in his own stunt area throughout the week, but we missed that.

As for the 2017 Z1000 SX … it doesn’t look massively difference to the outgoing model but in actual fact does have some significant changes, that include lowering the rear; eco friendly exhaust (looks the same to me though); dash now has a gear position indicator, changeable rev limiter and external temperature; traction controlled by an integrated  inertial Measurement unit and apparently this is linked to a new Kawasaki Cornering Management Function (KCMF) which changes the braking force and means the  traction control and ABS are lean angle sensitive.

The fairing is a little wider and LED lights are added as well as modification to the rider and pillion seat which make it a bit more comfortable.  I’d love to get a ride on one at some point to get a feel for what those differences mean in practice – but my sense is that overall the Z1000 SX will continue to sell well as it was such a good bike even before the 2017 model upgrade.

Of course there was a bunch of other models on the Kawasaki stand and I’ve dropped some pictures in below.

In the third and final part (to follow) I’ll include something about a few of the freebies that I picked up, as well as the last of the words and pictures from this years show.

There are some more pictures below and clicking any one of them will open a scrolable gallery.

To return to the home page of this Blog, please click here.