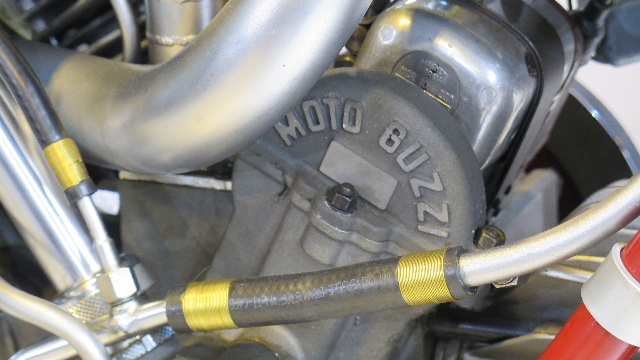 I wrote about this years Motorcycle Live in Part 1 and Part 2. This Blog post is the third and final part of the write up following my visit to the 2016 show in Birmingham.

In Part 2 I had wrote about the manufacturers stands that I thought were pretty good, and they were (not in any particular order): Yamaha, Kawasaki, Triumph and Harley Davidson. I had been really looking forward to seeing the Moto Guzzi stand and the new models, but to be honest I was a little underwhelmed at the display in Hall 3.

The bikes of course were nice, but the way the display had been set up just seemed a  little bland, especially when compared to those that I have already referred to. The V9s on display looked good.  I really love the look of the Roamer and on display was a white and black model complete with back rest and rack and a silver Bobber with the red detailing on the tank.

Naturally there were a few V7s there including an anniversary edition – but accepting that beauty is in the eye of the beholder, I just didn’t think it worked and almost seemed like a clash of style and taste with the chrome tank, brown seat and the 50 of the V750 picked out with a yellow background … but doubtless there will be plenty that like it, it just isn’t my cup of tea at all.

And to continue along similar lines I don’t think the new version of the V7 Racer is any sort of improvement  – the tank, seat hump and mud guard are in a flat/matte finish and although the previous version of the Racer was never really about subtlety – my personal view is that this variant seems all over the place in terms of styling.

I didn’t get pictures of all of the Guzzi’s on display but I have posted a few more below, including a couple of fascinating older models, including the 1950 500cc Bicilindrica.

I took the opportunity to sit on the mighty MGX-21, and although its not the type of Guzzi I aspire to own, its certainly pretty incredible looking and has a presence all of its own, I can imagine it would be a cracker of a bike to ride … and comfortable as well.

Moving on from the Guzzi stand, there were plenty of other things to see at the show and we enjoyed wandering round looking at the bikes from BMW; Matisse, Enfield, Indian and the rather odd looking machines from Husqvarna.

Sometimes though you just cant beat looking at a bit of the detail of the machines on display and I was as happy to do that as look at the actual bikes. Whether its the subtle beauty of an exhaust, brake line or suspension set up – and what ever motorcycle eye candy floats your boat, there was plenty to ogle at, and there’s some of it in the following pictures: