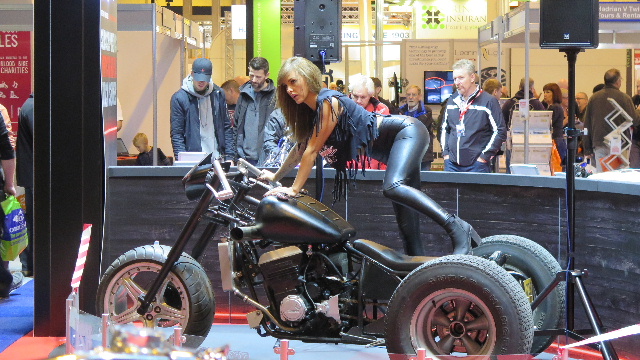 Yesterday my nephew and I drove through some of the most prolonged and torrential rain I have seen in a long time to visit the annual motorbike show  Motorcycle Live 2016, at the National Exhibition Centre in Birmingham. You can read Part Two here

It was a bit of a late call as to whether we went or not and so we weren’t able to take advantage of the cheaper advance ticket prices, this meant on the day we paid £25 each rather than the £19.50 advance price and £12 to park rather than the £10 advance parking fee.

I suppose the first question then is was it worth the £31 each that it cost us (£25 entry and shared parking fee of £6) – and the short answer is yes it was.

The exhibition halls were well set out and with displays from most of the major manufactures there really was loads to see and more new 2017 models than you could shake a stick at.

In advance of going I was particularly looking forward to visiting the Moto Guzzi and Kawasaki stands, clicking on the previous two links will take you to their respective stand information.

I suppose its also fair to say that having never owned a Kawasaki until my current Z1000 and then adding a Vulcan S to the garage earlier this year I do currently have a bias towards all stuff Team Green.

This show was set to round of my visits to Motorbike shows for this year having been to the excellent Llangollen Bike Show (Llanfest) in July and the Manchester Bike Show at Event City in April. The NEC show has a relatively long run,  from 19th to 27th November so gives plenty of opportunity to find time to get there.

I think each of the three shows have their merits, each has quite a different feel and each are well worth a visit, you can read about my visits to the other shows by clicking on the links above.

I suppose the particularly bad weather was enough to deter many who might otherwise have gone on their bikes, although there were plenty who had braved it, and thankfully for them there was secure indoor parking for the bikes included in the ticket costs. Thakfully as well we managed to avoid getting too wet on the short walk from the car park to the entrance.

I suppose its as simple as if you like bikes, like wandering around and looking at bikes, like sitting on bikes and generally like anything to do with bikes then you wont be disappointed. You could argue that the £31 cost is expensive to to go to a show, and to be honest I would say its at the upper end of what I would pay, but we were at the show for around three and a half hours so on that basis I think it’s OK and all in all reasonable value.

The machines of Rossi and Marquez were also there and not surprisingly they simply looked stunning.

In addition to the bikes there was the usual array of clothing and gear manufacturers there which were worthy of a browse around, as I wasn’t really looking for anything in particular I cant really make any informed comment on how good the ‘show prices’ were.

We took time out to go in the FMX Live show in Hall Four and it was pretty good.

The FMX show itself runs for about 20 minutes and as well as being a useful addition to the whole event it’s also an appetizer and opportunity to advertise the Monster Energy Arena Cross tour that runs in various locations across the UK later this year.

The show is essentially some pretty talented guys showing their skills with their freestyle motocross display – the show was included in the ticket price and was well worth the time out to watch it. Capturing great shots of the display was beyond the limitations of my camera, but if you check out the FMX link above then there are plenty of decent pictures there.

I have included a bunch of pictures below (clicking any one of them will open a scrolable gallery) and Ill write a further post later with lots more pictures and information from the show, and I’ll also tell you which manufacturers stands I thought were the best.

You can jump to Part Two here