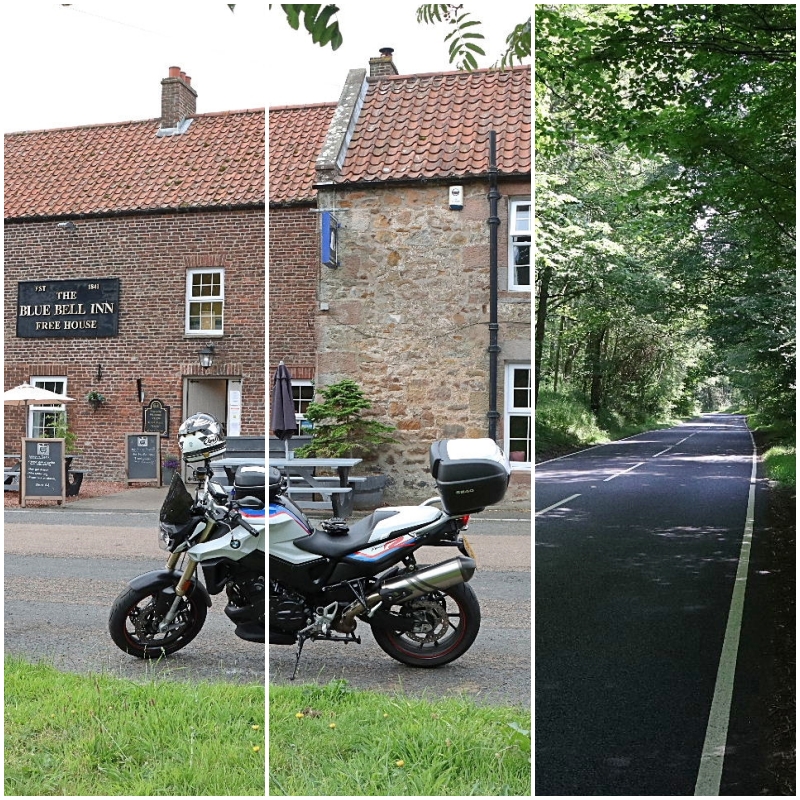 This is the final blog post in the short series of updates following my motorcycle road trip to Scotland in July 21. You can read previous parts at these links: Part 1, Part 2 and Part 3.

The weather during the trip had been ideal and almost exactly as per the forecast that led to my late decision to travel. Fortunately these days I can be pretty flexible with my time and, in general I wouldn’t book a motorcycle road trip to Scotland any further in advance than I really had to due to the changeable weather.

Had I made the trip just one week later, and in fact as I sit writing this, then it would have been pretty miserable with the remarkable levels of rainfall and thunderstorms that have hit the UK this week. Even though the weather was excellent for four and a half days of my trip, it wasn’t ideal on Thursday morning when I left Buckie.

Not the best route

As I have biked and driven across the Cairngorms several times I decided that I would head for the Aberdeenshire coast this time. Although my expectations were that it wouldn’t be as ‘good’ a ride as coming across the Cairngorms, it was my unfamiliarity with that part of Scotland that led to me heading first for Banff, then Newburgh, Stonehaven, Montrose, Arbroath then onto Dundee and Falkirk.

The roads were decent but the weather was misty with low cloud and temperatures that didn’t really rise much above 16/17c during the morning.

Whilst the dull and misty weather didn’t really impact much on the riding, it certainly killed the coastal view, and much of the mornings journey along that coast felt like quite a contrast to the ‘highs’ of the previous days riding.

In fairness it probably wouldn’t have made much difference where I rode – it would be hard to match what I had previously seen and enjoyed so much on the west coast.

After Dundee I headed for Cornhill on Tweed (a little over the border into England and in Northumberland) and onto my overnight stop, just a mile from the battle field of Flodden, where King George IV of Scotland had been killed back in 1513, along with 10,000 or so of his men.

The latter part of my route took me down towards Falkirk and the Kincardine Bridge, by which time the weather was good again, but my route wasn’t the best and I should really have headed for Rosyth and the Forth Bridge. An epic navigational mistake put me through the centre of Edinburgh in 27c heat … and it was very very slow going.

I’ve nothing against Edinburgh, it’s a city I quite like and I have stayed there dozens and dozens of times when I was working and also my wife and I had a very decent break there a few years back doing all the touristy things … but to be honest it’s no fun to motorcycle through the city centre on a warm day.

Once out of Edinburgh the last 50 or 60 miles of the day were brilliant, enjoyable and in very decent weather.

My final days riding took me back into Scotland (the Scottish Borders) for a few miles as I headed for Kelso and Jedburgh then down to Corbridge through the Northumberland National Park and past Kielder Dam before crossing the North Pennines via Alston Moor and the Hartside Pass. After that it was pretty much towards Penrith, Shap and then home.

I have biked across Alston Moor and the Hartside Pass many times over the years but dont think I have ever done so with such a near perfect combination of ideal weather and absence of almost any other traffic.

Great route for a short break

I have biked in Scotland many times and it’s not somewhere that I would ever really see myself getting fed up with. I think I’ve now got a pretty decent route sorted that fits perfectly with a four night/five day bike trip along with a good number of options in different places along that route and that would all make for good stopovers.

In headline terms the route for this trip is highlighted in the graphic below, and shows (roughly) the route from and to Shap. My total mileage for this short break was 1,262. For a future trip I would swap out the route down the east coast side of Scotland on day four and do one of the routes down across the Cairngorms and maybe into the Scottish Borders around Moffat (check out my post on the June trip to Scotland)

At some point I’ll get a five day route written up with what I think are the best bits from recent trips and then file it away for a sunny day and the prospect of a few days decent weather – then it’s just a matter of throwing a few things together, a full tank of petrol and a twist of the wrist …

Scroll down for the final picture gallery from this trip

You can visit my photography blog is at rainycity.blog

Clicking on any of the images below will open a pciture gallery that you can clcik or scroll through.