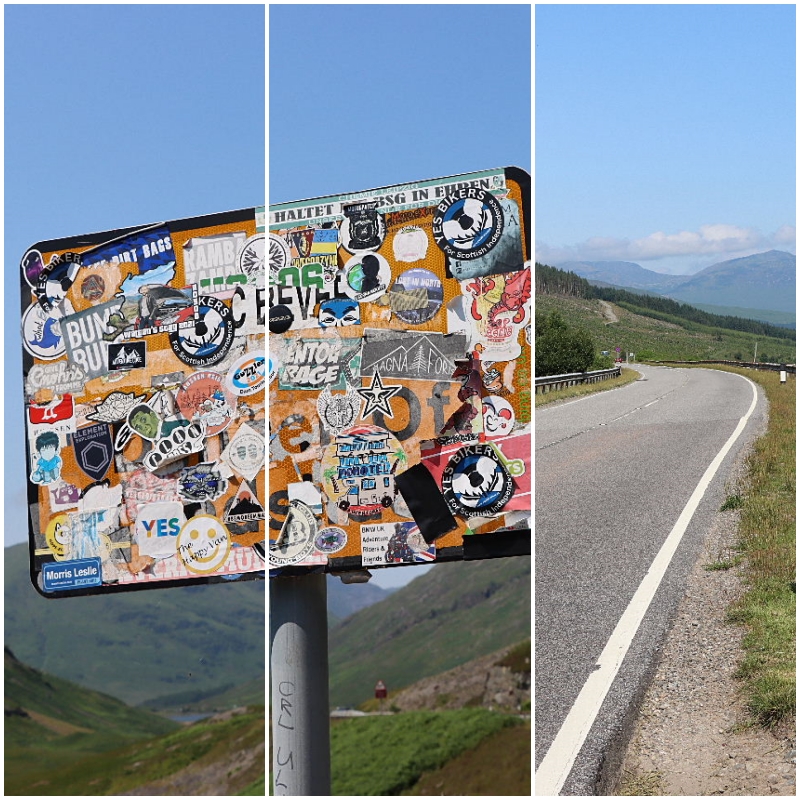 This second post from my recent Scotland trip was a real highlight and will stay in my memory for a long long time. You can read Part one here or Click here to go to Part 3.

After leaving my accommodation at Braidmead House in Irvine I headed towards Kilwinning on the A737 which is a very decent stretch of road and one that was almost empty for 25 or so miles. I started and ended the day with glorious weather, I just couldnt have asked for better weather on this trip.

After that I head for Tarbet on the A82 alongside Loch Lomond and onwards to the magnificence of Glencoe. After Glencoe it was on to Fort William, once through there it was Corpach (a place where we had holidayed as family some years ago) and then it was the absolute highlight of the A830.

It’s worth repeating that

‘the absolute highlight of the A830’

I have motorcycled all over Europe – including Switzerland and it’s alpine passes, Austria and the Grossglockner, Spain and the Picos, Portugal and the Serra da Estrella, Italy and its Trentino region and the Alps of Slovenia into the Italian Dolomites and I would have to say that the road that runs out from Fort William to Mallaig would certainly get a place alongside those names and locations I have mentioned.

There are plenty of roads in the UK that I really like and one of them runs alongside St Mary’s Loch in the Scottish Borders and a road I have ridden on more times than I can remember. It’s a road I have done by car a few times as well and it’s one of those roads that’s almost as enjoyable in a car as it is on a bike.

The road itself (the A708) runs between Selkirk and Mofatt and it’s been mentioned many many times in the past on this blog (along of course with plenty of pictures). To be honest it’s not just the road I like, it’s the whole ambience of the location – it’s somewhere I always think of as being quite a special place.

As good as the A708 is, and as special a place as it is for me – I really can’t rank it quite as highly as the A830 Mallaig road, or to give the road its more appropriate and much more evocative name ‘The road to the Isles’

The road to the Isles

Is it really that good?

The road is a major road that connects Fort William to the port of Mallaig. It was originally constructed in the 19th century by Thomas Telford the Scottish civil engineer, architect, and road, bridge and canal builder and stayed as a single track road for most of the 20th century.

The last section of the road was upgraded as recently as 2009. The road itself is significant in Scottish culture and an internet search throws up all sorts of fascinating information including a 1955 a Pathe news video on You Tube and audio recordings of songs that celebrate the route from the 1920’s.

Once I was past Corpach the road for the most part was as empty as it was stunning and I had the most exceptional of rides to Mallaig … and then back.

Mallaig is a small port in Lochaber, and is on the west coast of the Highlands. Its the place that is the end of the line for the West Highland Railway that runs from Fort William and has ferry connections out to the isle of Skye and other outlying islands. If you are in that part of Scotland and you have the slightest opportunity to travel that road then you really should – it’s unthinkable that you won’t find it to be spectacular and stunning.

After making my way back from Mallaig and into Corpach, I then made the short journey to my overnight accommodation in Spean Bridge – a journey of only 10 or so miles to my overnight accommodation at The Braes Guest House a mile or so from the centre of Spean Bridge, including a stop at Neptunes Staircase just outside Fort William to watch a navy vessel moving through the locks.

All in all I had a quite brilliant and quite memorable day which was wrapped up nicely by some time spent sat outside chatting to a really nice couple from Darlington who had been travelling the NC500 route.

Clicking on any of the images below will open a picture gallery that you can click or scroll through. Click here to go to Part 3