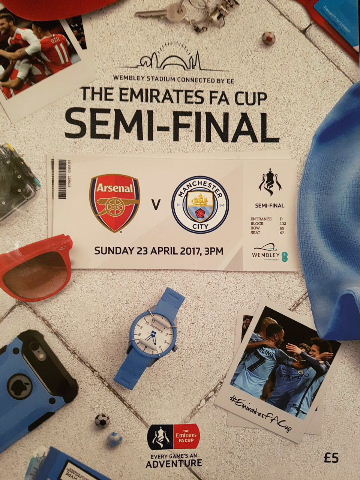 Weekend saw another trip to Wembley, a place where we have been regular visitors since Manchester City hit the financial jackpot a few years back.

The weekend trip was to see City take on Arsenal in the second of the 2017 FA Cup Finals.  Despite the mixed and unsettled weather that we have been having so far this year, Sunday proved to be a pretty pleasant and sunny day.

Travel was routine and trouble free and as we had booked on the Yellow Car Park at Wembley we were only a few hundred yards from the stadium. The car park was new since last year and although a bit steep at £30 for the day, on balance, it makes life very easy and saves messing about parking further out and then making the way there on public transport.

Other than a coffee stop at Watford Gap services we traveled there directly and went for our usual wander around after parking up. So it was down Wembley Way and then left just before the tube station and onto The Green Man pub.

We weren’t too bothered about consuming the vast amounts of alcohol that some were enjoying, but when your team has been allocated the pubs on that side of Wembley then The Green Man is always worth a visit, if only to check out the  banners, the crowds and to catch some of the pre-match atmosphere.

After that it was back to the car for a bite to eat, drop the match day programmes into the boot and then to make our way  into the stadium.

We’ve sat in various places in recent years but this was the first time we had sat so low down, towards the centre line and in the second row. Despite the bland exterior design of the stadium it really is a tremendous venue to watch football – and our seats this year were no exception when it came to providing a great viewing location.

My starting point with Wembey is that it should only be used for cup finals and games played by the national team.

Whilst I am wholly indifferent to the national team it does irritate me at how the stadium is used for semi finals and a significant amount of other games that in my opinion make it less of a ‘special place’ than it really ought to be and overall cheapen the experience.

As for the game – it was a thoroughly enjoyable match. City were the dominant team for the most part, but Arsenal provided a strong and resolute performance. The game was blighted by some odd and at times poor decision making by the match officials, and the decision impacted on both teams.

An Arsenal goal in extra time was enough for them to take the match day win and progress to next months final – despite hitting the post, the bar and having a good goal ruled out City ended up falling short on the day.

Although ultimately the game was lost and the result was disappointing it was another fine day out for us at Wembley.

Our journey home was one of the best we have made from there in recent years and after leaving when the final whistle went we were back to the car, away from the stadium and on the M1 in less than 20 minutes – and even with a couple of short stops on the way home we were back just before 10pm.

So all in all a good day out with a dissapointing end – but it’s probably as close as you can get to a sure thing as you can get that we’ll be back at Wembley again fairly soon. So until next time …