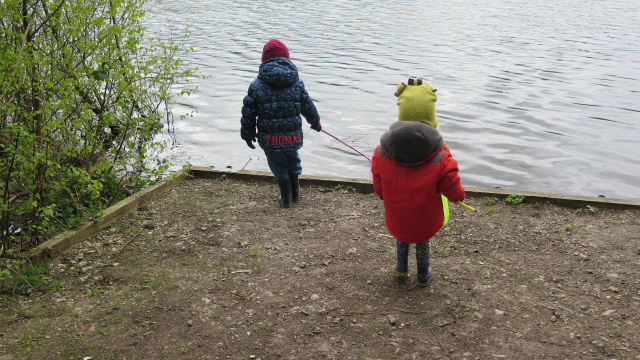 OK, so it’s not a bike related post but last week Pat and I had Daniel and Emma with us for the best part of the day.

We had bought them a tent for the garden, although what we thought was a tent was actually to become a church (or so Daniel and Emma told us).  It was case of eyes closed and then the surprise, I think the pictures below speak for themselves.

Ready for the surprise

After being introduced to their new tent, we set off to a fairly local park to do some ‘fishing’ along with with their newly acquired nets, a washed out coffee jar (to optimistically act as a temporary container for the vast amount of fish we were sure to catch) and some miniature chocolate biscuits … shaped as penguins.

We had been advised early on by my daughter, that Emma wanted to ‘hold a fish’ so we knew from the off that expectations needed to be managed. Despite the previous days 20c temperature, we were less fortunate with the days weather, but on the basis the right clothes can generally take account of the wrong weather we were not too bothered by it and neither were the children.

The fishing at the local reservoir sort of fully met my expectations – we caught a bottle, a discarded lipstick, a piece of wood and a small glass bead.

That aside it was a decent walk, the children enjoyed it and I was able to demonstrate my long since practiced skill of skimming stones which seemed to make up for the oddities that we had caught in their nets. A further walk led us to the the play area of the park which was decent enough, but not before we came across a pile of stones that had been deposited for path repairs and naturally enough the pile of stones became a mountain that simply had to be scaled.

After a couple of hours out it was back home, but not before we stopped for an ice cream in a local McDonalds.

The ice cream itself was nice enough, although the environment was barely acceptable, I cant understand the need for a place like that to a) have iPad’s for children to play on and b) why on earth parents/carers are out with their children but seem locked to their ‘phones at the expense of giving any attention to those they are with – it’s just bizarre in my opinion.

After that it was home and dinner in the tent – well where else would you eat your dinner when you’ve just got  a new tent?

A fine day for an autumn walk in the Tame Valley

Spotted this fellow whilst out walking.#pumpkin #t