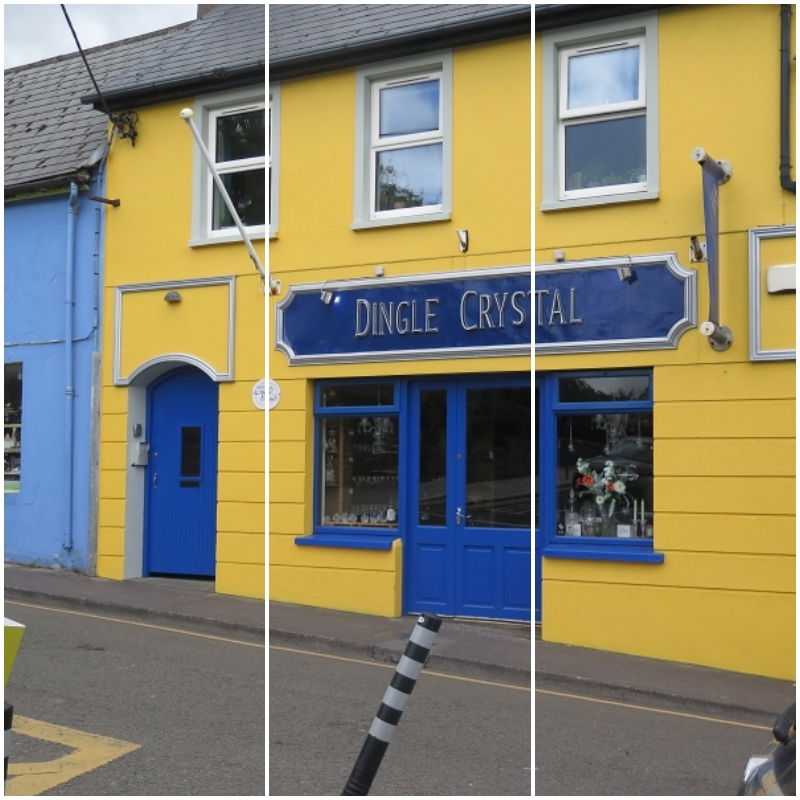 Return to the Emerald Isle – Part 2

I wrote in Part 1 that after crossing to Dublin from Holyhead I had made my way down to Clonmel in County Tipperary for my first overnight stay.

After my stay in Clonmel (see Part 1) I headed for the Dingle Peninsula, but not before I had enjoyed a decent breakfast in a pretty interesting breakfast room at my accommodation.

The room was packed with all sorts of memorabilia – much of it connected to motorbikes, you will see a few pictures from that room are included in the ‘Wednesday Picture Gallery’ as you scroll down this page.

It’s worth pointing out this particular post has three separate sets of pictures. The reason for the extra pictures in this post is so I can give fair coverage to the superb colour of Dingle and the wonderful hostelry in Listowel that is Mike the Pies.

Not the most direct route

Had I taken a direct route from CIonmel to Dingle I could probably have been there in less than three hours and travelled less than 130 miles or so.  But of course I hadn’t come to Ireland to take the shortest and most direct routes. The route I decided on would take me down via Cahir, Mitchelstown, Mallow and Ballingeary and onto Bantry Bay in County Cork a journey of some 160 miles or so.

Once at Bantry I headed for Glengariff, Kenmare and Killarney before finally heading for Dingle and to my overnight accommodation. All in all I experienced another fine days motorcycling and thoroughly enjoyed myself, despite getting ‘lost’ a couple of times and despite ending up on some roads that I really wished I hadn’t got myself on.

Those regrets of being on dodgy roads soon turned into feelings of being ‘glad I experienced that’ or rather a case of me convincing myself that once I had safely navigated back to solid tarmac and started to breath easy again that if the experience hadn’t killed me then it had probably been good for me!

I’m not exaggerating when I say at one point I ended up doing around 10 miles or so an ‘L’ graded road that was just horrible to ride on. Steep gradients, loose gravel and plenty of grass and which I descended some sections of with my heart in my mouth at the slowest of speeds along with a feeling that at any time I might be off.

It’s a busy and colourful place

My accommodation in Dingle was ideally placed. It was far enough from the centre to be quiet but close enough to walk to in just a few minutes.

I’ve now biked a fair bit around the peninsular’s that include Dingle, the Ring of Kerry and Beara. I would say each are geographically stunning and each are very different in terms of how populous they are and how they feel.

Beara feels remote and rugged whist the town of Dingle feels like a sort of tourist magnet and the peninsula in the middle of those two with the Ring of Kerry and which attracts plenty of tourists seems (to me) to be something in between each of those in terms of how it feels.

The Dingle peninsular is quite stunning and is more than worth visiting. The town of Dingle itself is an absolute riot of colour. I gather from bits and pieces I have read that there are some 65 pubs there and a lot of them (most of them perhaps?) seemed to have live music either on or scheduled for the evening I was there.

Folk like different things, but holidays and busy places wouldn’t always be what I choose as that would not normally be quite my cup of tea. Just about the last type of holiday I would ever pick would be a resort type one, but that doesn’t mean I’m overly averse to tourist locations. Dingle is clearly a tourist location but I’d go there again in a heartbeat –  it’s worth it just to take in the colour of the buildings and lively pub scene.

Make sure you check out the colourful Dingle picture gallery towards the bottom of this page.

Heading for the Loophead Lighthouse

After checking out of my accommodation in Dingle I headed along the peninsular to the village of Ballyferriter before turning back to head towards Brandon via The Conor Pass.

My next overnight stay was set to be in Listowel (at the same accommodation I had stayed at in June). As with every day on this trip I wasn’t taking a direct route – in fact I would pretty much go past Listowel to catch a ferry at Tarbert before heading out to the Loophead Lighthouse and then returning back to Listowel for the night.

After heading back from Ballyferriter and Dingle I took the Conor Pass, and it was an absolute joy to ride. It’s not especially long, probably a little less than eight miles or so but it’s one of the highest mountain passes in Ireland and it really is quite dramatic at times.

Taking the pass allows you to cross from the north coast of the Dingle Peninsular to the south coast. The twisting ribbon of tarmac is well surfaced with a number of places to stop and take in the views that at times are truly breathtaking. It’s good riding but does need attention especially at some of the narrow parts of the Pass.

I had enjoyed another cracking days riding, the Shannon Ferries service from Tarbert to Killimer was regular, efficient and decent value and the road out through Kilrush and onto Loop Head in County Clare was well worth doing. Once past Kilrush it was pretty quiet and on another occasion I’d like to go back and perhaps take in a tour of the lighthouse.

There has actually been a lighthouse (in various guises) at that site since the 1600’s and the headland and surrounding countryside is rugged, wild and a terrific place to visit. After spending some time taking in the views I headed back for Killimer, the ferry to Tarbert and my overnight stay in Listowel.

My overnight stay was at the Carriglea B&B in Listowel, it’s was such a good stopover in June that I had no hesitation in gong back there on this trip.

Some words from my June trip

… and for any bikers who are considering travelling and staying in this part of Ireland I can definitely recommend a stay in Listowel and in particular at this B&B. Parking for your bike is perfectly secure, it’s just a short walk into town for a drink/bite to eat and Aoife is the perfect host and she was really helpful with good local knowledge and advice as well as cooking up and serving a fine breakfast to order.

Don’t forget to scroll down for the pictures from Wednesday, the additional picture gallery ‘Colourful Dingle’ and then the third set of pictures that take in the trip to Loop Head and the wonderful Mike the Pies.

Clicking on any of the images below will open a picture gallery that can be clicked or scrolled through. Scroll down for the  two further picture galleries: ‘Colourful Dingle and ‘Thursday’.

Clicking on any of the images below will open a picture gallery that can be clicked or scrolled through.

Picture Gallery – Thursday, including the one and only ‘Mike the Pies’

Clicking on any of the images below will open a picture gallery that can be clicked or scrolled through. It’s worth me saying as well that if you are in Listowel you will be spoilt for choice of which pubs/bar to go in and I cant really make any sensible comment on which is best. I think I would need to live there for some time to sample them all. But what I can say is that it’s well worth visiting Mike the Pies.

It’s feels like a pretty unique place –  and rather than me try to explain the background to its status as an important Irish music venue, check out this Hot Press article for the background and story

Aidan the owner is a really nice guy and despite us being on different sides of the Manchester football divide I really did enjoy having an excellent pint of Guinness there and chatting with him.

At Mike the Pies

Some great pics Tony, I’m building a list of must see places here! What a great idea putting the town names on your bag for quick reference.