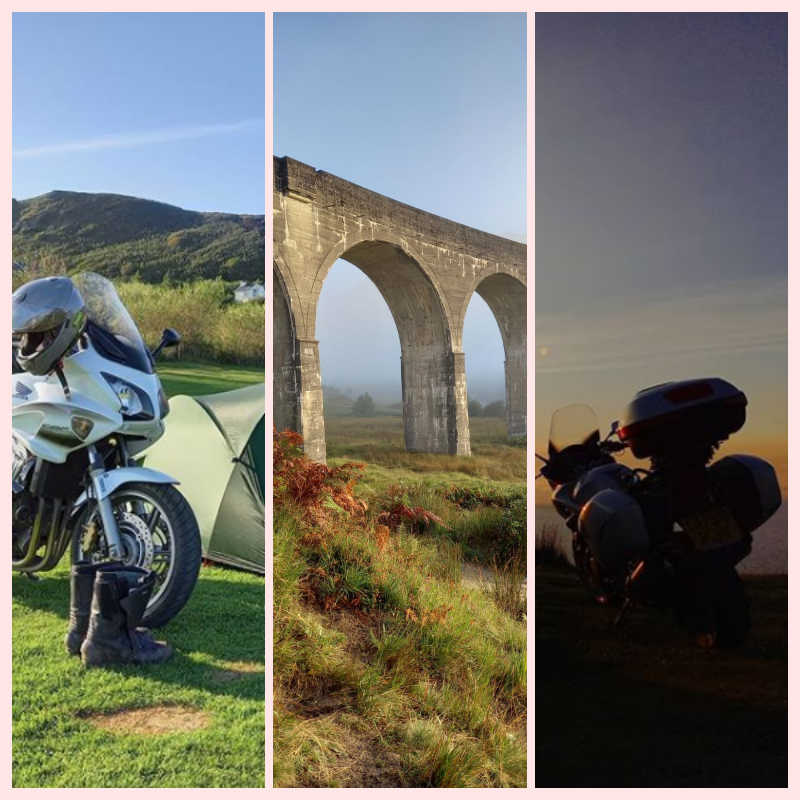 A few weeks ago I had called to the J&S store in Northwich and got chatting to a fellow biker.  We had a general chat about this and that and then got onto talking about trips and travels.

It turned out that Rob had a trip to Scotland coming up and as I had recently returned from a couple of short Scotland trips it didn’t take long to swap a few tales of routes and recommenced roads.  You can read about the first trip here and the second trip here.

Under other circumstances we would probably have shook hands before we went our seperate ways but the pandemic has seen to that.  So instead we said farewell with a promise for me to send  some info’ to Rob via email along with relevant links to this Blog.

The other thing I did before we left was to ask Rob to let me know on his return how he had got on. In between times we corresponded by email and I was absolutely delighted when Rob dropped me a really decent write up of his trip to Scotland

In some respects Rob is at the start of his biking adventures, and I admired his enthusiasm to just go and ride without too much of a plan.

I found out later that his first bike was a 1982 Honda CB400 Superdream (pictured).  He has since moved on to a very decent looking Honda CBF 1000 and that was the bike he did his Scotland trip on.

I asked Rob if he would mind if I included the write up he  had sent me on this Blog and I am happy to say he has let me do that.

If your a biker it’s worth a read, but if you’re a biker thinking about getting out there on your own without a plan then it’s definitely worth a read.  Maybe it can provide that little bit of inspiration or that little spark that encourages you to just go and do it.

It reminded me very much of the title of the book I wrote following a chat with a biker a few years back who wanted to travel but had put off doing it for fear of breaking down.

My answer then as it is now, is simply to say What if you don’t break down?  Find out more about the book here.

The words below (in blue) are Rob’s, and you will also find a small picture set at the end of his write up.

Day One took me up through Loch Lomond, Glencoe and Fort William to camp in Glen Nevis. I made good time and arrived shortly after 3pm so went took a quick hike up to Steal Waterfalls and part of the West Highland Way.

Day Two It was a foggy start to Day Two. I stopped at the Glenfinnan viaduct en route to the ferry at Mallaig and then on to Skye for lunch time. I met a lovely couple on the ferry who were spending a couple of days on Skye, and rode with them from the ferry for around 30 minutes before branching off and heading across to the Fairy Pools. It was a warm day so the temptation of a refreshing swim in the Fairy Pools was too good to resist!

After a quick dip I headed up to my next campsite at Uig. I set up camp in good time which meant I had plenty of time to enjoy the evening, The sunset across Uig Bay was stunning, and I watched the Calmac sail in from Harris.

I met a chap off the ferry who came with nothing more than his old push bike and two small panniers with all he needed for the three  weeks he was spending cycling around the Western Isles. He came up on the train from London and visits several times a year.

Day Three The morning of Day Three was a cold one. Very foggy and with it a biting wind. I climbed out of Uig, steep, and twisty roads to cut through the cloud to stunning views of the morning sun lighting up the top of the clouds down below. It was an early start so most of the wild campers at the Quiraing were just surfacing and making their first cuppa!

The views across the Quiraing were stunning, the mist had cleared apart from a few scattered patches down below. I headed down to Kilt Rock and Melt Falls before heading back to the mainland via Portree and the Skye Bridge.

From there it was a stunning ride through long sweeping bends clad with a dense mix of Fir, Spruce and Pine trees, The aroma was rich in the early morning sun. I made good time up to Tornapress where I paused for a second to get a picture of the famous sticker wrapped sign at the start of the Beanach na Ba. I was shortly joined by another rider on a  Black CBF1000 so we exchanged pleasantries and our thoughts on the bike.

After that it was a steep and exhilarating climb up the Applecross pass, with a few tight switchbacks before reaching the top. A quick drink stop and then down the other side towards Applecross. I was flagged down by a couple on a GS1200 who had a flat on the rear. We were without phone signal so the guy asked me to find the rest of his group at the Applecross Inn and tell them of his predicament(and to send the rescue brigade!). I made it down to the Applecross Inn and started searching for a “group of four men on a KTM, BMW, Kawasaki and Triumph. Of course the group weren’t with their bikes so I started asking around groups of 4 men (of which there were a few!) until I found them. As promised, I relayed the information from the chap sat 2 miles up the hill to rest of his group, who at first looked started as if I was about to say their friends had been hurt, but were then relieved when I said it was only a flat. They thanked me for passing on the message and joked that they would enjoy tucking into their lunch before heading up later on to help sort the flat tyre out.

I pushed on around the peninsula and climbing steeply, and then heading down the twisting barrier sided corners. Despite the beautiful sunshine, there was still mist lingering above the water down below. It was quite spectacular.

I continued up to Gairloch where, a few weeks previous, I had contacted a campsite to try and book. They were full but I was feeling a little more adventurous than using proper facilities, so hunted for a nice spot to wild camp.. I found one. Perched right on the cliff edge near Aultgrishan. There was literally no one else around and the sunset made for a spectacular end to the day as it set over the ocean and igniting the evening sea mist that had started to roll it’s way towards land.

Day Four Another chilly start, I broke camp and headed back down to Gairloch to use the facilities and fill up with fuel. It didn’t take long for the fog to clear and reveal the long open roads that would lead me towards Inverness and then on to the Cairngorms that day. The roads were clear so it was nice to open the taps towards each new horizon. I skirted the Western edge of the Cairngorms, stopping in Aviemore for some lunch, before pushing on back down towards Fort William and Glen Nevis where I would camp again that night.

Day Five saw me summit Ben Nevis shortly after 10am. I set off around 8am after breaking camp and fueled on a sausage barn and some nuts, I reached the top after 2hrs and 5mins. Visibility was around 10m at the top so I didn’t hang around long as the wind was biting. A quick march back down and I was back at the bike before midday. I grabbed a bite to eat before heading back to the campsite on foot to take a quick shower and freshen up after the morning hike.

Revived, I then took the stunning route back through Glencoe and down to Loch Lomond – plenty of opportunities for safe overtakes which made the ride more enjoyable than being stuck behind a string of bumbling camper vans. Skirting round the bottom of the Loch, I made a quick stop to get supplies for dinner, and then pushed north for 20 minutes to my final campsite on the eastern edge of Loch Lomond. It was a basic site; one composting toilet and a single sink for washing dishes and personal hygiene were considered highlights of the facilities on offer. The site had 10 loch-side pitches which were nicely spaced so you felt like you were wild camping, but could strike up conversation with your neighbour and exchange stories of your travels around a socially distanced crackling fire pit. I watched flames settle down to glowing embers before settling into my tent for the night.

Day Six and a quick fry up on the camp stove set me up nicely for the journey home. After a brief battle with the school drop-offs in the suburbs of Glasgow, it was easy riding to cruise back to the comforts of home.

Scotland 2020. An incredible, socially distanced, adventure that has certainly wet the appetite for more!

Now if that isn’t the words of someone who has had  a blast then I don’t know what is.
Instagram: You can also follow Rob on Instagram at bike.hike.adventure
Clicking on any of the pictures below will open a gallery that you can scroll through.

Nice write up. Scotland is amazing for motorbiking. Had a great time doing the NC500.

Hi – sorry for delay in replyng. Scotland is indeed amazing and I hope to be up there a few times this year. Best wishes. Tony