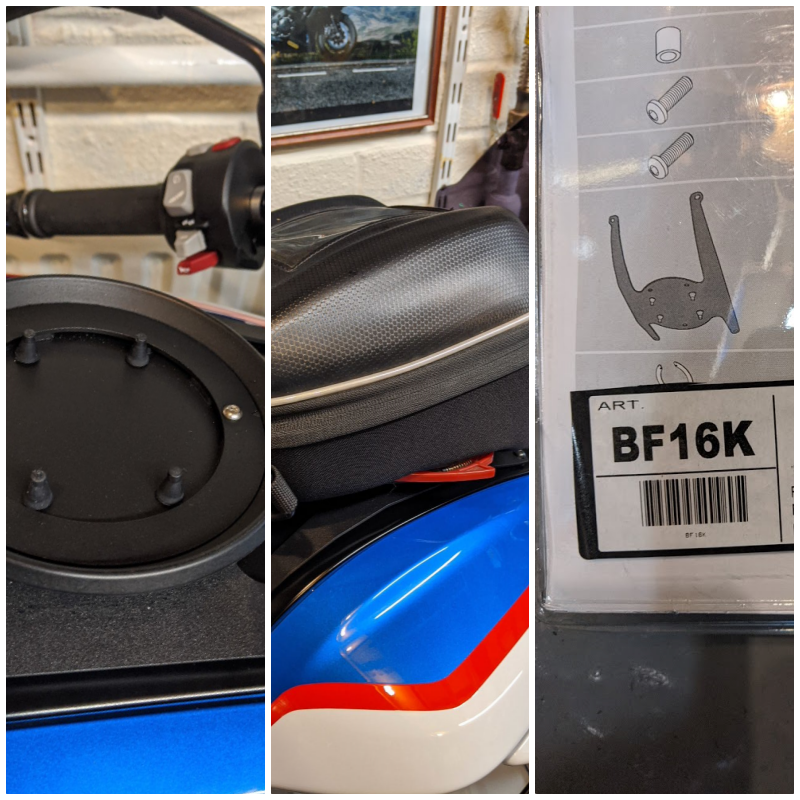 For the last few years I have used a small Givi tank lock tank bag and it’s been used on a Kawasaki Z1000SX, a BMW RnineT and a Kawasaki Vulcan 650S.

The bag has seen plenty of service and travelled widely across eastern and western Europe as well as any number of trips in the UK.  As the bag is a universal fit to the Givi tank lock mechanism the only thing that needs changing to use it across different bikes is the actual adapter plate that fits on/around the petrol cap.

The 3D603 tank bag has since been improved and superseded by a newer model the ST602B which sells at about £78 or so, although the MT05 model which has a slightly better capacity (5L rather than 4L) sells at around £10 less – having said that there are some design differences that you would want to check out if you were thinking of purchasing either of them. Worth noting that the prices I have mentioned are from the Givi web site I dare say there are different (cheaper) prices at other online sellers

I have found the tank lock system to be really good, it allows the bag to be clipped on and off in an instant and with the shoulder strap attached it’s not a problem to take it with you when your are off the bike.

The F800 throws up another conundrum when it comes to fitting a tank bag – namely that what appears to be the petrol tank isn’t the petrol tank and so there is no petrol opening to attach an adapter to and if you are going down the magnetic attachment then you have an issue straigt away with plastic construction of the faux petrol tank.

There’s a few solutions – some less elegant than others, I opted for buying the BF16K adapter set up which is basically a pretty well designed and robust way of attaching a small ‘frame’ that the adaptor flange fits on. Its a simple case of removing four of the eight Torx screws on the middle section of the ‘tank’ then fixing the small ‘frame’ with the replacement Allen screws provided – after first fitting the flange to the frame.  The flange doesn’t come with the BF16K adapter but I already had one spare as I no longer have a Kawasaki.

All in all it’s a really easy fit, looks decent enough and means I can continue to use the tank bag – and it only takes a second or two to swap it from the RnineT to the F800.

If you want to check out other recent posts, see the following links:

Luggage on the F800R