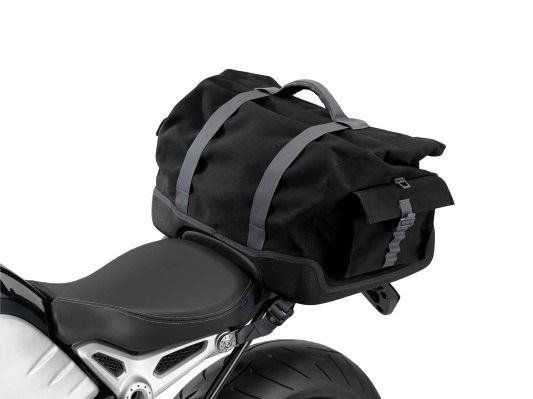 I changed one of my bikes last year for a BMW RnineT. The bike I traded was a Kawasaki Z1000SX, which was probably just about the best ‘all rounder’ that I have ever had.

When it comes to touring it really is an ideal bike and that one took me all over western Europe (on several occasions) and on my last trip took me down through Poland, Slovakia, Slovenia, Bosnia and down the Dalmatian coast past Dubrovnik in Croatia. It really was a fabulous bike – one of the things that was ideal was the superb luggage system, with the easy clip on/clip off pannier system.

Buying the RnineT didn’t mean I wasn’t going to tour Europe anymore, but it certainly meant that sorting luggage for a trip would be more of a challenge than on some of my previous bikes and there was no way that I would get something as practical as I had on the Z1000.

I spent ages looking around at different options – some seemed reasonably practical but (to me) looked plain ugly, others looked pretty good and pretty stylish but were more suited to days out or overnights rather than two or three weeks away.

Eventually I decided to go for the BMW Motarrad soft rear bag – its a neat product and designed specifically for the bike.

The words on the web about this bag describe it as being water-repellent canvas and holding about 40 litres, which is plenty big enough for a couple of weeks away. The key thing about this bag and its fitment to the bike is that the base plate (or ground plate) is made precisely to fit the pillion seat on the RnineT.

Having settled on the luggage that I wanted I called into my local dealer (William Manchester) and ordered it there – one of the good things down at Williams is that I was able to order without any commitment to buy, this was ideal as I wanted to physically touch it and see what it would look like on the bike.

The usual top notch service saw the bag ordered and in stock for me the very next day – I was more than happy with it and ended up paying £208, which was less than the internet price.

The bag itself looks to be really well made and quite a clever design, it looks like it will fasten easily, the  supplied attachments will be very unobtrusive on the bike and simply attach behind a couple of the Torx screws towards the rear.

It probably wont get used until later in the summer when I head off for Spain and Portugal, but I have no doubt at all that it will do the job.  It also packs away really neatly which is ideal for storage when not in use.

The only other thing to add on the luggage front is that at some point in the next few weeks I need to purchase a tank log ring for my Givi Tank Bag – the bag has served me well and has been used for about three years on the Z1000 it also fits (with the same tank ring) onto a bike that my wife and I use – a Kawasaki Vulcan 650S.

The actual model of that tank bag has been upgraded to the ST602 (and appears to be a better design) but I’m not sure I’ll replace it just yet, although at about £65 or so it’s a reasonable price.

Awesome i love it ,

Thank you for your kind words
Tony

Wonderful sharing, thanks so much
Really love your way