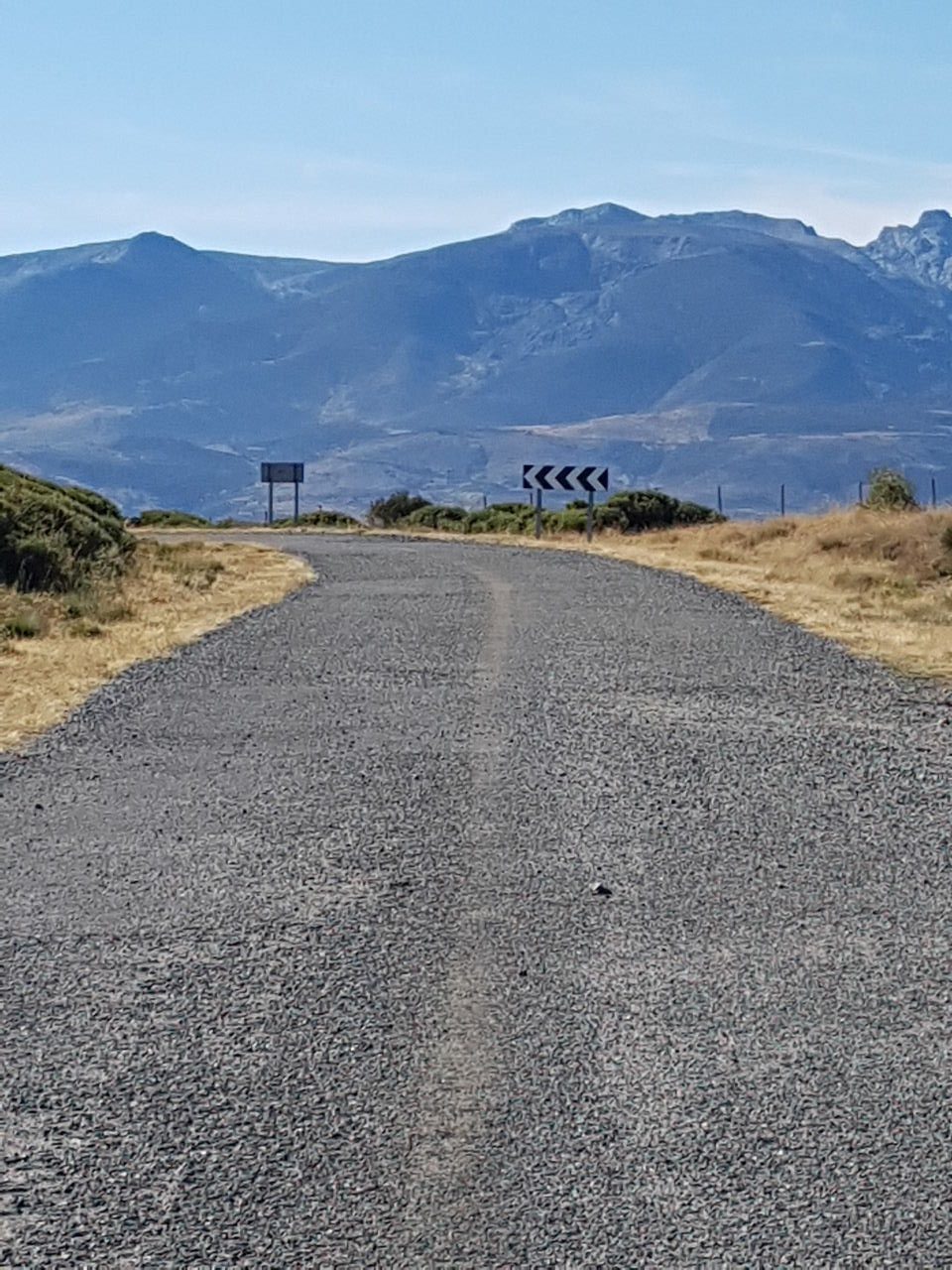 This is the fourth and final part of the Blog posts following the recent road trip to Spain and Portugal that my wife and I made on the Kawasaki Vulcan. If you missed the earlier installments, you can get them at the following links: Part 1; Part 2 and Part 3.

After setting off from Candelario we headed for Alpedrete a town set in the Sierra de Guadarrama mountains and around 30 or so miles from Madrid.

Initially we traveled in the direction of Hoyos del Espino, knowing that this would keep us close to the hills and mountains of the Sierra de Gredos. We were climbing into the mountains around Candelario within a few minutes of leaving our hotel.

We were rewarded with wide open views of the mountains that seemed to form a vast bowl as far as the eye could see. The weather was good, the roads empty and the sky was blue – what more could we ask for.

We were in no rush, we were just enjoying the riding and the views – a couple of hours into the days ride we stopped for refreshments. A cold drink for my wife and a coffee for me had pretty much become our regular roadside order.  We were near Mengamuñoz when we stopped, which I guess was only 60 or so miles from the mornings starting point, we were not alone as there were a couple of dogs lay out in morning sun and seemingly too hot (or stupid) to move and take some shade.

The rest of the day was just easy riding as we headed through Avila; El Pimpollar and San Lorenzo and on to our overnight stay in Alpedrete. To be honest finding accommodation for this particular evening was the only time on the trip that I had seemed to spend ages looking for somewhere, everywhere else I’d been able to turn up a decent stop within a few minutes of looking.

Alpedrete is located pretty much in central Spain and with a population of around 13,000 or so had facilities to match – ie a reasonable range of bars and places to eat, so after checking in and getting showered we knew it wouldn’t take us long to find somewhere to sit and get a cold beer. On the downside I’d been keeping a close eye on the rear tyre, the wear on the left hand side had been a little unusual and a few days back I’d been starting to think that it was looking unlikely it would see us home – after leaving the bike I resolved to have a look the following day before we set off and make a decision on whether to replace it or not.

After leaving our hotel and making a couple of left turns it probably took us all of 10 minutes to find a bar and a cold beer … and then ice creams.

The place we had stayed at overnight had been decent enough but was a little noisy – a combination of the water system making noises long after the WC, sink or shower had been used, a couple of folk in a room above having a fine and enthusiastic time with each other and then the noise of bins being emptied about 05:30 in the morning – but I suppose as this had been the only time on the trip when we hadn’t had the peace and quiet that we both so often crave, then we couldn’t really complain too much.

After breakfast and packing up I went to bring the bike to the front of the hotel and at the same time looked at the rear tyre – it was a no brainer, it had to be replaced.

By chance there was a KTM dealer in Alpedrette – so that was pretty much our first port of call, they were not able to help us but did give us the address of another place about five miles away.

We found the place OK but unfortunately as helpful as they were the earliest they could get a tyre for us was 16:30 that afternoon, but they were good enough to get on the ‘phone to another place and confirm that they had a tyre and could get us sorted. Just to complete the helpfulness the guy who had been on the ‘phone for us, got his helmet, got his bike and instructed us to follow him – and he did no more than take us directly to the tyre place a few miles away – there’s a picture of him (in the red helmet) in the photo’ set below.

Once sorted we were on our way and headed for our final overnight stop at Hotel Villa De Lerma in the old town of Lerma which is in the Province of Burgos.

Once again it was a good day – both weather wise and riding wise. We had sort of intended to head for the city of Segovia for a wander round but because we had to get the tyre sorted we changed our riding plans a little and headed initially for Lozoya and through a regional park area, then onto Cantalejo, Aranda de Duero and then Lerma itself, although we were in the Province of Segovia for part of our ride.

Lerma was nice enough, and although still bathed in sunshine it was certainly a little cooler in the evening, in fact I think it was the first time we had put a jumper on over tee-shirts whilst we sat and had a beer in the town square before going for a wander and then eating indoors instead of al fresco

We had an excellent breakfast at the Hotel Villa De Lerma and were packed and on the road by 10:00, which was a later start for us but as this was our last day and our route was up to Santander for the late ferry back to Portsmouth we were in no rush as we had left ourselves an easily manageable riding distance of around 120 miles or so (if we took a direct route).

As chance would have it a friend who was also traveling in Spain was more or less set to intersect our route as he headed for the Pyrenees. He had also spent some time in the Picos and we had sort of kept in touch during the trip via social media and arranged to meet at a garage a few miles from Masa, just off the N627.

I wasn’t at all optimistic that we would finish the days journey dry – the forecast wasn’t great and after Masa we would be heading back into the mountains so the chance of arriving at the port after a good soaking were high.

I cant recall which road we were on but it was another decent Spanish back road, devoid of any traffic, as we made our way to meet with Dave when we were to be treated to a wonderful sight and one that we will both remember for some time.

After watching for a short while we continued on our way and saw more birds flying and soaring on their own. We’re not completely sure, but we think there may have been two different types and we’re pretty sure that some of them were Red Kites, whilst the others may have been Griffin Vultures – what ever they were it was a majestic site.

After that it was onward to meet up with Dave, for coffee and a bite to eat, and what turned into a pleasant 90 minute stop as we swapped notes of the Picos and our respective trips in general.

Once we had said farewell we set off on the last leg to Santander, and at about the 50 km mark from our destination and with a darkening sky it looked for all the world that the rain was set to hammer down. We stopped, put on rain jackets and swapped to waterproof gloves – but as it turned out the rain didn’t materialize, the sun came back out and we arrived at the ferry port in sunshine and 20c – and we had finished off with some decent roads!

The ferry home was pretty routine, a little rocky through the Bay of Biscay but then after that it was smooth and just the boredom of the 24 hour journey to Portsmouth to contend with.

Once off the boat in Portsmouth there was just one last thing to do before the unenviable slog back home to Manchester – turn right out of the docks and stop at the nearest fish and chip shop for a routine order of two portions of chips … and loads of vinegar!

Other than the ride down to Plymouth and the slog home from Portsmouth we hadn’t touched any motorways or autoroutes, so we just gritted our teeth and got on with it.

We were home in the early hours, tired and cold but with memories to last a lifetime. It really had been a fabulous trip.

Wandering along the River Weaver and a visit to Vale Royal locks.

Macro in the garden with the Sigma 105mm lens

Stop staring at me. Macro in the garden.#macro #ma

Macro in the garden.#macro #macrophotography #cano

Smoke gets in your eyes. Macro in the garden. #mac