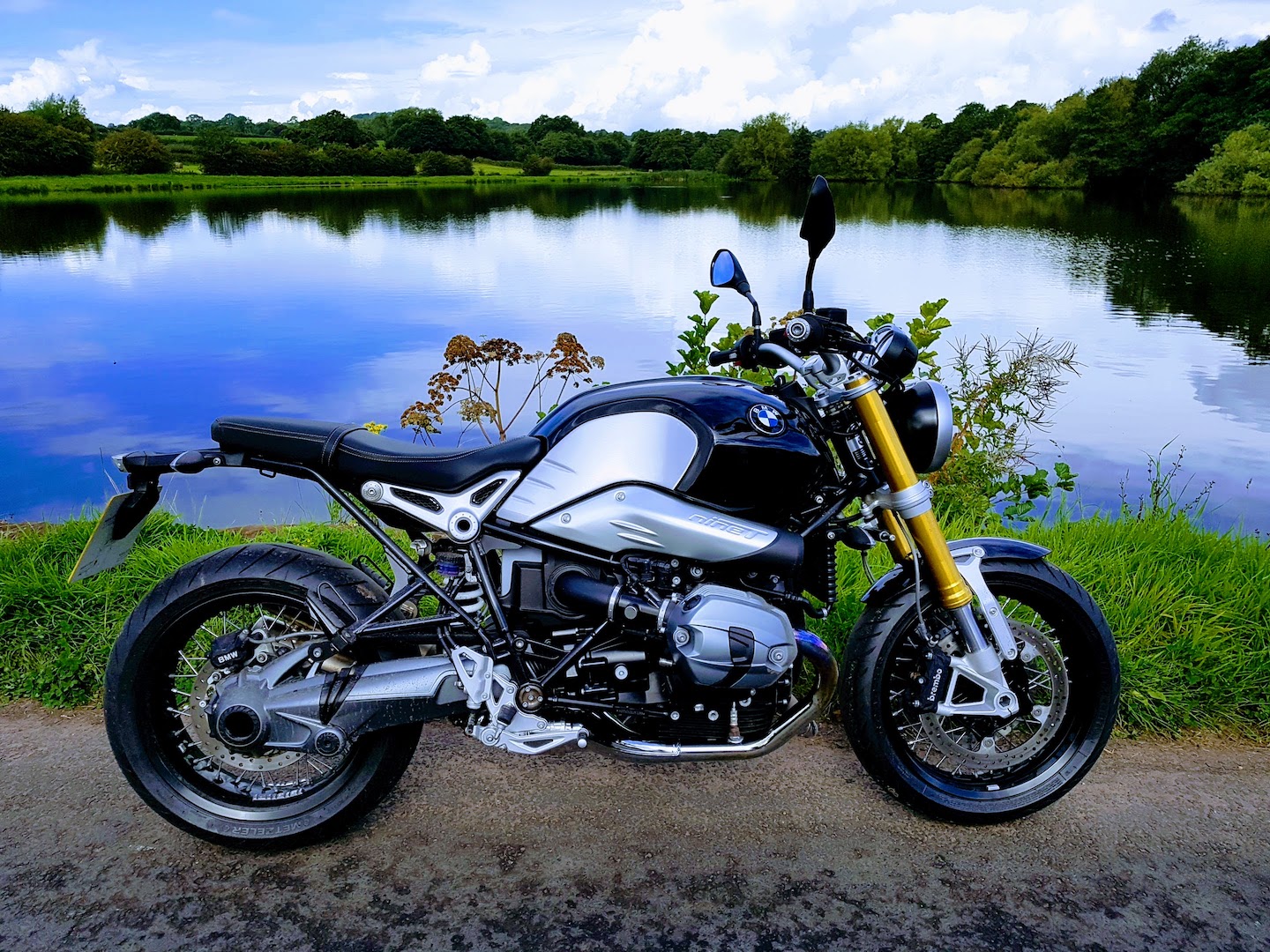 Over the years the excitement and pleasure of collecting a new bike has never lessened for me, and riding my Z1000 SX down to the Williams BMW dealership in Manchester earlier this week was no different.

The weather over the last few days had been decent, and it was still decent as I clipped the panniers to the Z1000 for the last time, but maybe not surprisingly the rain started to lash down just as I opened the garage door, thankfully the worst of it was soon past by the time I made the fairly short journey to the dealers to collect by R nine T.

If you read my previous Blog post you will know that I had been more than happy with the Kawasaki Z1000 SX that I was about to hand over (if you haven’t read that post you can get it here), it was just the yearning for a change and something very different than an inline four that I wanted and the BMW I was on my way to pick up seemed to tick all the boxes for me.

I was struck by the bike a few years back when I had stayed overnight in Moffat in Scotland, not long after getting the Kawasaki.

As I was preparing to leave the B&B I had stayed in two fellas who had stayed in the B&B next to mine were bringing their bikes out from the overnight parking at the rear of the B&B they had stayed in – one was on a Triumph Street Triple, the other on a new R nine T – I was immediately intrigued by the bike and he told me he had just picked it up the day before and had rode up from the south east for a few days.

A few months later my wife and I called into Williams in Manchester and looked at the bike, not with the intention of buying, but just to satisfy my curiosity of a bike that looked so different. The pic on the left  is from that visit in April 2015.

Ever since then whilst I wouldn’t quite say I coveted one of these bikes, it was always a bike that I liked and was on the ‘maybe one day’ list

And it was on Wednesday that I collected my new bike – an R nine T.

As it happened two of our grandchildren has stayed with us the previous night so earlier that day  they had their last sit on the ‘green bike’ and said goodbye to it – going in the garage to look at the bikes and sit on them is something that has become the norm when they visit us. There’s some pictures below of them saying goodbye to the Kawasaki.

It’s way too early to form any overly firm opinions about the bike … but I was out yesterday and although I only did around 130 miles, I don’t think I’m jumping the gun to say that this bike is going to be a lot of fun.

Before I offer some first impressions it’s worth commenting on the service that I got at Williams – it’s an easy one to write as quite simply the service from start to finish was first class.

The Williams show room itself is pretty nice and well set out, the (decent) coffee, biscuits and cake on offer is probably a cut above that at most dealers … and yes I know somewhere along the line that will be factored in and recovered from the bike sales, but it was welcome, added to the overall visit and the place genuinely did comes across as a no hard sell, no hassle environment.

One of the things that we particularly appreciated was that when I was asking some pretty specific questions about the various R nine T models, Andy the salesman I dealt with spoke to both my wife and I, she was part of the conversation and didn’t feel excluded – and if I’m honest, whether it’s been buying cars, bikes of other items over the years that hasn’t always been the case.

Andy is worth the mention – he was as helpful as he could possibly be, sorted me out with a demo bike to ride, was able to answer all my questions and throughout my various visits there in the run up to me making my decision to purchase he was good humoured and easy to deal with, including a decent telephone ‘wind up’ call to me just before I collected the bike!

Apart from riding the bike home I’ve only done about 130 miles, half of them on damp roads yesterday but first impressions are better than good.

Beauty of course is always in the eye of the beholder, but when I look at the bike I cant really find a single angle from which I don’t think it looks good, bordering on exquisite.

The instrument cluster looks just right on the bike and it really doesn’t have a lot going on. There aren’t any switchable ride maps and modes, there isn’t an all singing/all dancing colour display and the wide handlebars aren’t cluttered with controls – but it’s almost that purity of function over form that really works on this bike – the fact that the form is also pretty good just makes the whole thing right in my opinion, (click the pictures to open, scroll down to continue reading)

One of the things that you cant help but immediately notice is that there is a noticeable lack of a clunk when you tap down into first gear, the gear change overall is pretty slick and smooth with a lighter clutch action that you might expect, although there seems to be a slight time lag for the green light to show and the N to show in the large gear indicator display when engaging neutral.

Throttle response is smooth, rear brake and gear lever seem to be positioned just right and the overall comfort of the bike is spot on for me (I’m 5′ 7″ and about 148 lbs). In fact I found the seat – which does look as though it might have the comfort of a plank, to be remarkably comfortable and actually better than the Z1000 I traded – but that’s a judgement based on only 130 miles or so and not based on a long day on the road.

I suspect the fuel range will be acceptable as the tank size is about 18 litres, but again it’s way too early for me to comment on fuel consumption. The brakes (ABS) and suspension feel good and the air and oil cooled Boxer engine is a more than tried and tested unit. Of course it’s hardly going to set the world alight with its 110 bhp, but if your measure of a bike is in all out BHP terms then you’ve probably sort of missed the point of this bike.

It’s also worth a mentioning the sound of this bike –  because it doesn’t disappoint.

The R nine T comes with twin Akrapovic exhausts and it really does sound good, not overly loud, just a satisfyingly deep tone, that sounds good on tick-over and even better on the move.

The baffles are easily removable and I suppose at some point I’ll whip them out to hear how it sounds without them, but I also expect I’ll be leaving them in.

One of the things that did surprise me yesterday was just how much crap was thrown up onto the pillion seat and onto my backside from the damp roads – I hadn’t expected that, so maybe it’s something to look at, there’s always a solution for everything.

Mind you the fact that the bike came back pretty dirty means that today I get the pleasure of giving it a good wash and clean – every cloud has a silver lining and all that.

In summary then, it’s far too soon for me to say much more than I have, I’ll write again in due course as I rack up the miles, but although it’s early I really don’t think I’m going to be dissapointed with this bike.

One last thing … I wrote earlier in this Blog post that two of my grandchildren had made a point of saying goodbye to the ‘green bike’. When I arrived home from picking it up they were sat on the doorstep waiting for me and naturally wanted to sit on the ‘black bike’.

Really interesting read and a great bike. At least in my opinion. Saw some great custom R Nine T´s on this years Glemseck101 event in Germany. I may buy one soon…haha