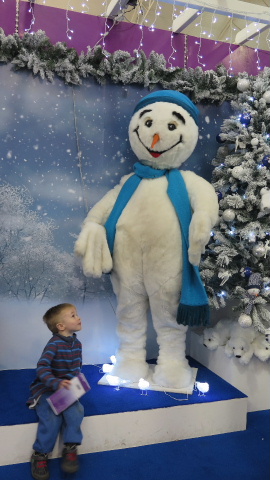 A few weeks back I had taken Daniel at his request for a ‘long walk’ and wrote a post about the grandparents unwritten job description  here.  Not surprisingly he wanted to go for another walk but this time the weather was a bit colder and a bit wetter. However there are some things that you really cant say no to.

Having said that I did have a contingency  plan if the weather was too bad. The fallback of a visit to a local garden centre to look at the fish as well as rabbits and what ever other living things they might have (and maybe a coffee for me) would be a safe bet.

As it turned out it was dry when two of our grandchildren arrived at our house as my wife had brought them back from their weekly gymnastics session.

Daniels requirements were quite precise: a walk in the woods; a drink; a jam sandwich and something with marshmallow in.  That had been easy enough to sort out and prepare so we pretty much set off as soon as he arrived. Emma isn’t up to ‘long walks’ just yet so she opted to stay with Pat and get on with some biscuit making.

Within all of two minutes he was off and clambering on the wet and slippy wood, totally oblivious to the cold and damp and taking no time at all to realize that Grandads trousers were ideal for wiping and drying damp and slimy hands.

Then it was a general wander through he woods with Daniel able to tell me there were so many leaves because it was Autumn, able to identify and name Magpies, counting to three in Spanish, telling me the Spanish words for white and blue and ‘serenading me’ with his latest song Adios Amigos … and firing a million questions at me all of which started with “but Grandad”

He also took time out to tell me that maybe Emma could come on a walk like this when she was three or four. Unsurprisingly this is exactly the same age range he told me that Harry could also come for a long walk as well. A simple calculation on that basis will probably see me doing this a few more times and until at least 2020 with a four year old!

After that it was the simple pleasure of wandering fairly aimlessly through the woods, balancing on anything and everything that could be balanced on, kicking leaves and making sure that just about every puddle and muddy walkway were used to test his wellies.

The play area of the park was deserted … no surprise to me at all, as most right minded people were probably keeping warm somewhere and Daniel was not at all put off by the damp play equipment – so whilst he clambered around I just pushed my hands deeper into my pockets

Lunch hit the sweet spot with Daniel – raspberry jam sandwich, a drink of water and a marshmallow wafer – to  a four year old that’s a feast and he enjoyed it all. The sleeve of my jacket proved a reasonable substitute for a cloth to wipe away the sticky jam from his mouth and I made a mental note to come a little bit better prepared next time.

Suitably refreshed we set off to see the ducks – but we were cut a bit short by a torrential downpour, so it was hood up for Daniel and rain hat on for me, not that it really mattered as Daniel thought it was all pretty amusing that I was cold and wet. Thankfully Vernon Park has a decent Tea Room so we made our way back there and whilst Daniel kicked off his wellies and had orange juice,  I had a coffee and we shared a decent cherry scone before heading back to the car and home.

Although we had been out the best part of a couple of hours it felt like we had been a bit cheated by the weather so a quick ‘phone call home to check whether Emma wanted to come out with us (which she did) meant that getting back home was just a quick case of picking up our two year old passenger before setting off for a couple of pets shops and the local B&Q – all winners with small children on a rainy day, plus the opportunity to have a pretend shower in B&Q was just too much to resist.

When we got home it was obvious that Pat hadn’t been slacking in the Grandma stakes and she had ‘assisted’ Emma in producing some first rate vanilla flavored biscuits. It seems pretty clear from the pictures below that it was good fun, although that hair,  a mixer and pastry covered hands must be some sort of health hazard!