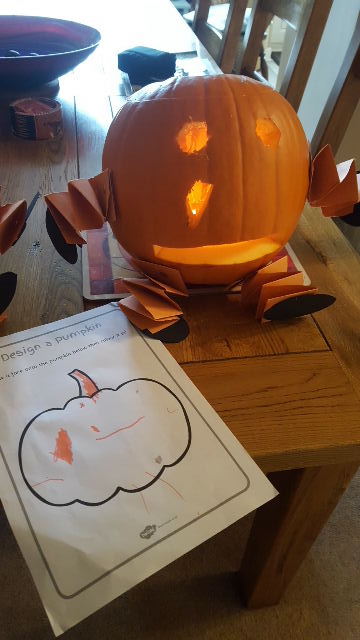 It’s been that time of the year again when a quick look at the Grandparents ‘job description’ indicates that you best get some pumpkins bought and get the carving knife out.

A short video message to Daniel and Emma confirmed that they did indeed want to call and do the pumpkins for I think, the third successive year.

A quick trip to the local Morrison’s store secured two large pumpkins for only £1.50 each and we were almost set.

I followed up my first video message with another suggesting that both Daniel and Emma design how they wanted the pumpkins to look … my daughter Sarah uses the twinkl resources  on a regular basis for all sorts of educational activities with the children and for this task she downloaded the ‘design a pumpkin’ stencils and the children set  about doing their own thing with them. Daniels was a pretty traditional face, whilst Emma’s was more of a Picasso cubist type approach …

Additionally Sarah made some rather impressive legs and arms for the pumpkins and which were a step up from what I had in mind (pipe cleaners).

My wife supervised (I cant always be trusted with a sharp knife) and took the pictures and the children helped scoop out the insides and checked that I had faithfully reproduced the faces they had designed.

It was a fun way to spend a short amount of time and in truth Pat and I probably enjoyed it as much as the children. Next year it’s sure to be three pumpkins rather than two as Harry joins the fray …

Some pictures below in a scrolable gallery.clicking the first will open them up